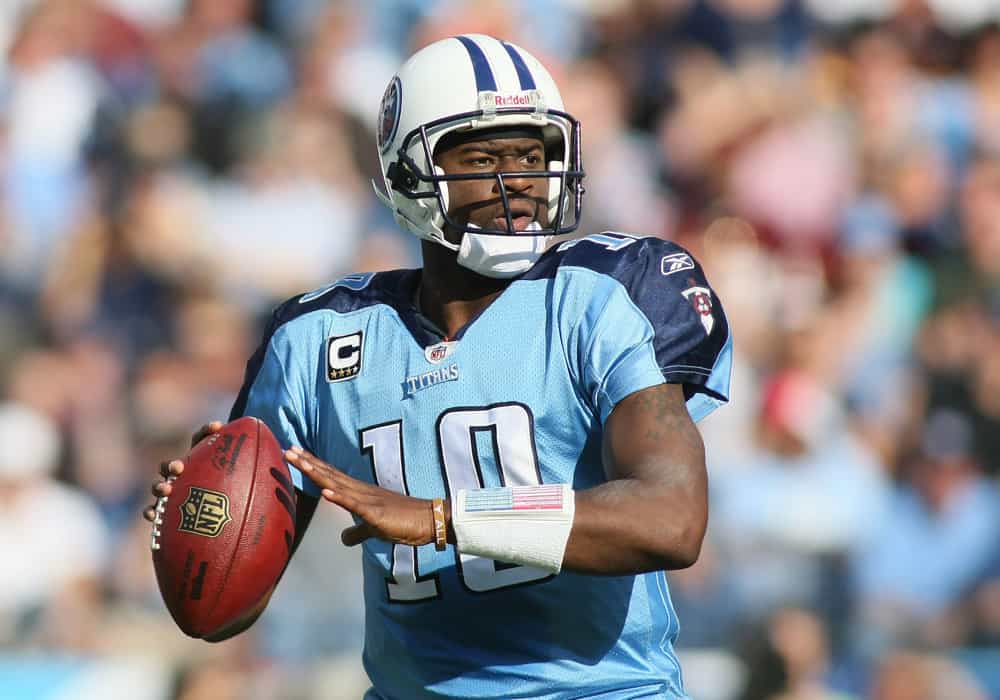 As an electrifying dual-threat quarterback and leader on the 2005 national championship-winning team, there was no shortage of hype surrounding Vince Young when he entered the NFL draft.

Even to this day, however, Vince Young is still much more famous for his college football accomplishments than his time in the pros.

So what happened to Vince Young, and why was he never able to reach quite the same level of stardom in the NFL that he enjoyed in college?

As a high school quarterback, Vince Young lit up the scoreboard on opposing defenses.

Before entering high school, though, Young had a challenging early life.

While on his bicycle riding through his neighborhood as a child, Young was struck by a vehicle.

The accident caused the bike’s handlebar to penetrate Young’s stomach, nearly killing him and forcing him to spend the next several months in the hospital.

Later in life, Young credited the accident for some of his mental and physical toughness.

After Young himself was caught up in a gang fight, his mother convinced him to leave his friends in the gang behind and change his ways.

The lesson stuck, and Vince Young turned to sports as an escape, choosing to wear the number 10 to honor his mother (whose birthday was June 10) for helping get him off the streets.

Over three years as a high school starter, Young compiled an eye-popping 12,987 yards of total offense.

For his dominant performance at the position, Young was given a number of awards, including being named Parade‘s and Student Sports‘ National Player of the Year his senior season and being designated as The Sporting News‘s top high school prospect.

“You can’t turn on a television in Houston without seeing Vince Young. You might see him more than the Texans. He was like LeBron James in Houston when he was coming out of high school.”

In addition to football, Vince Young excelled at a variety of other high school sports as well.

He played the guard/forward position in basketball and averaged 25 points per game.

He made the all-state team in track and even played as both an outfielder and a pitcher for his high school baseball team.

It was football, though, that Vince Young loved the most.

And after graduating from high school, Vince Young decided to focus on football alone.

One of the Greatest to Ever put on a Longhorns Jersey

In 2002, Vince Young accepted a scholarship to play for Coach Mack Brown at the University of Texas.

This 2002 Texas recruiting class that Young was a part of was nothing short of star-studded.

It included players who would go on to play in the NFL such as Brian Robison, Kasey Studdard, Lyle Sendlein, David Thomas, Selvin Young, Rodrique Wright, Justin Blalock, and Aaron Ross.

Vince Young was redshirted his first season with the Longhorns.

In the 2003 season as a redshirt freshman, Young started out as a backup to Chance Mock.

After Mock was benched near the midpoint of the season, though, Young began receiving a lot more playing time.

He was named as the starting quarterback for the Longhorns in 2004.

Now a redshirt sophomore, Vince Young was the starting quarterback for every game during Texas’s 2004 campaign and helped lead the Longhorns to an 11-1 final record as well as the first Rose Bowl appearance in the university’s history.

During this first full season as a starter, Young compiled 1,849 passing yards and 1,189 rushing yards.

Young’s 2005 season turned out to be his final season with the Texas Longhorns.

Happy 38th Birthday to Vince Young!@VinceYoung10 was iconic at Texas…

However, it was also his greatest.

In 2005, Young helped the Longhorns achieve a perfect 11-0 regular-season record.

This record was enough to earn Texas an invitation to play for the BCS National Championship in the 2005 Rose Bowl against the Trojans of USC.

With Vince Young leading the Longhorns and two Heisman Trophy winning stars (Reggie Bush and Matt Leinart) in the backfield for USC, this championship game was one of the most anticipated matchups in the history of college football.

And it was a game that certainly lived up to the hype.

Trailing by five and facing fourth and five from the nine-yard line with 26 seconds left in the game, Vince Young scrambled into the endzone to give the Longhorns a 41-38 victory over the Trojans.

Young completed the game with 267 yards passing and 200 yards rushing.

In addition to being a national champion, Vince Young raked in a number of other awards and honors in his final season with the Longhorns.

He was given the Davey O’Brien Award for being the nation’s best college quarterback, was named as an All-American, and finished second in Heisman voting behind USC running back Reggie Bush.

Following the 2005 season, Vince Young indicated that he planned to return to Texas for one more year.

However, Young eventually changed his mind about this decision.

In 2006, Vince Young decided to enter his name into the NFL draft.

When Vince Young decided to enter the NFL draft, there were several concerns regarding his ability to play at football’s highest level.

The first criticism against Young was the fact that many considered him to be an excellent rusher but only an average passer.

The second criticism against him was Young’s unique, side-arm throwing motion.

There were also serious concerns regarding Vince Young’s score on the Wonderlic – a test given to all NFL draft prospects that is designed to test their ability to learn complex playbooks – after it was reported that Young only scored a 6 out of a possible 50 points.

However, it was later reported that this number was inaccurate.

All of these concerns, though, were ultimately overlooked when Vince Young was taken third overall by the Tennessee Titans, making him the first quarterback selected in the 2006 NFL draft.

Young made his first NFL start against the Dallas Cowboys where he completed 14 of 29 passes for 155 yards, one touchdown, and two interceptions.

He went on to lead the Titans to eight wins during his rookie campaign and was named the NFL Offensive Rookie of the Year.

By the start of the 2007 season, Young had cemented himself as the starter for the Tennessee Titans.

While his stats during this 2007 season were less than stellar, Young was able to check off a major goal by leading the Titans to a playoff appearance.

However, he was only able to manage a 53.5 passer rating in their playoff game against the Los Angeles Chargers – a game that Tennessee lost 17-6.

In the very first game of the 2008 season, Vince Young injured his knee.

He was only expected to miss two to three weeks due to the injury.

However, Titans head coach Jeff Fisher decided to go with Kerry Collins as the starter for the remainder of the 2008 campaign.

In 2009, it was reported that Collins would remain the team’s starting quarterback and that Vince Young would have to earn back the position if he still wanted it.

After an abysmal 0-6 start to the 2009 season, Collins was benched and Vince Young became the starter once again.

Young went on to win eight of his ten starts in 2009 and finished third in voting for the NFL Comeback Player of the Year.

Expectations for Vince Young were as high as ever entering into the 2010 season.

Unfortunately, things didn’t pan out quite like Tennessee Titans fans hoped that they would.

Young was only able to lead the Titans to a 4-5 record during their first nine games and only threw ten touchdowns during this time.

During a Week 11 loss to the Washington Redskins, Young tore a flexor tendon in his right thumb and had to leave the game.

Following this loss, Vince Young threw his shoulder pads into the crowd and later got into an altercation with his head coach in the locker room.

At the end of the 2010 season, Titans owner Bud Adams issued a press release stating that Vince Young had been removed from the Titans roster.

In 2011, Young signed a one-year contract to play for the Philadelphia Eagles.

He was able to help lead the Eagles to a win over the New York Giants in his first start with Philadelphia.

However, Vince Young lost his next two starts with the Eagles, throwing two touchdowns and five interceptions over the course of those two games.

Following the conclusion of his one-year contract, the Eagles chose not to resign Vince Young.

In the years that followed, Young tried to fight his way back to a spot on another team but never succeeded.

He signed with the Buffalo Bills in the summer of 2012 but was cut from the team less than a month later.

This story repeated itself in 2013 with the Green Bay Packers and again in 2014 with the Cleveland Browns.

In 2017, Young agreed to play for the Saskatchewan Roughriders of the Canadian Football League (CFL).

However, a hamstring injury suffered in his first training camp with the Roughriders was the final straw of Vince Young’s professional football career.

After being waived from the Roughriders, Young decided to finally hang up his helmet and cleats for good.

Following his retirement from football, Vince Young accepted a job at the University of Texas to work in its Division of Diversity and Community Engagement.

In 2019, though, Young was terminated from this position due to poor job performance.

Young also ran into financial problems after it was reported that he had spent all of his $34 million in NFL earnings and had defaulted on a $1.9 million payday loan.

In 2021, it was announced that Vince Young would once again return to his old stomping grounds at the University of Texas to work in some capacity within the university’s athletic department.

As of yet, the exact terms and responsibilities of Young’s new role in the university have not been announced.

I see everyone is hearing the news that CDC has me working for our Longhorns. So happy to be able to help him out as well as everyone in the Athletic Department, share my knowledge and experiences, reach out in the community and serve the school I love! You know I Bleed Orange!🤘🏿

In the end, the concerns with Vince Young’s playing style along with untimely injuries kept him from ever being an NFL great.

His NFL career notwithstanding, Vince Young remains one of the most famous and electrifying college athletes of all time. 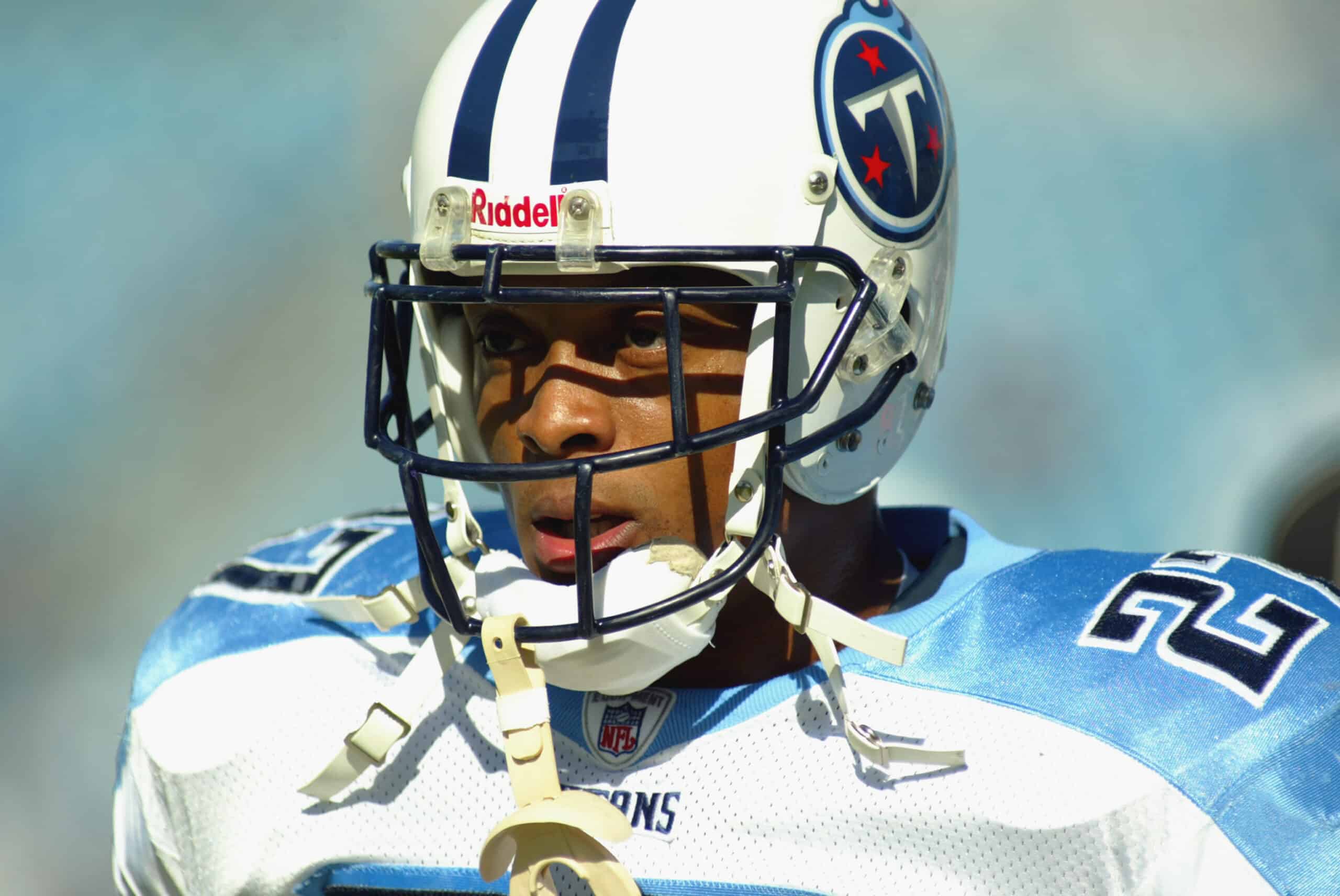 The Life And Career Of Eddie George (Complete Story) 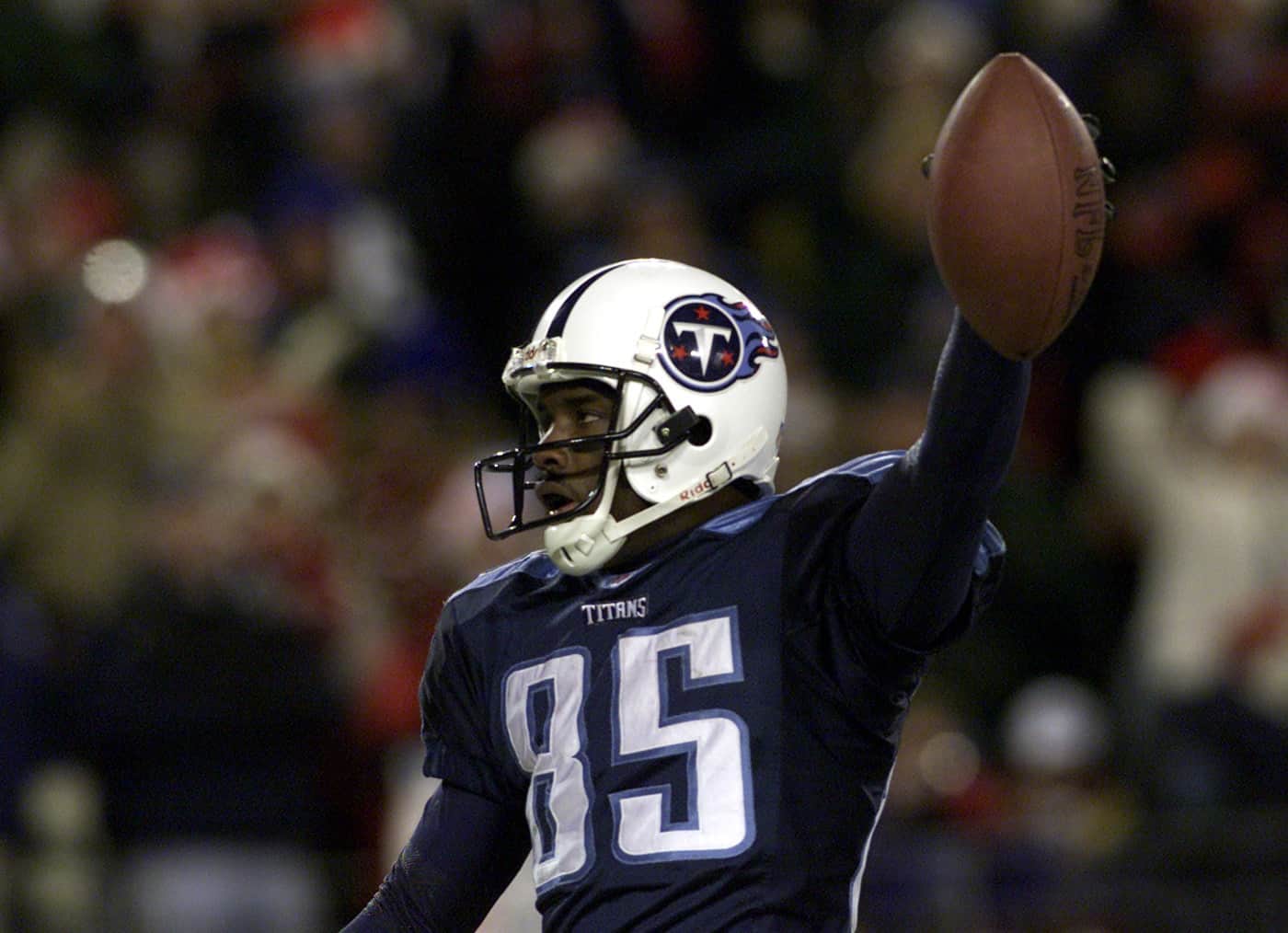 The Life And Career Of Derrick Mason (Complete Story) 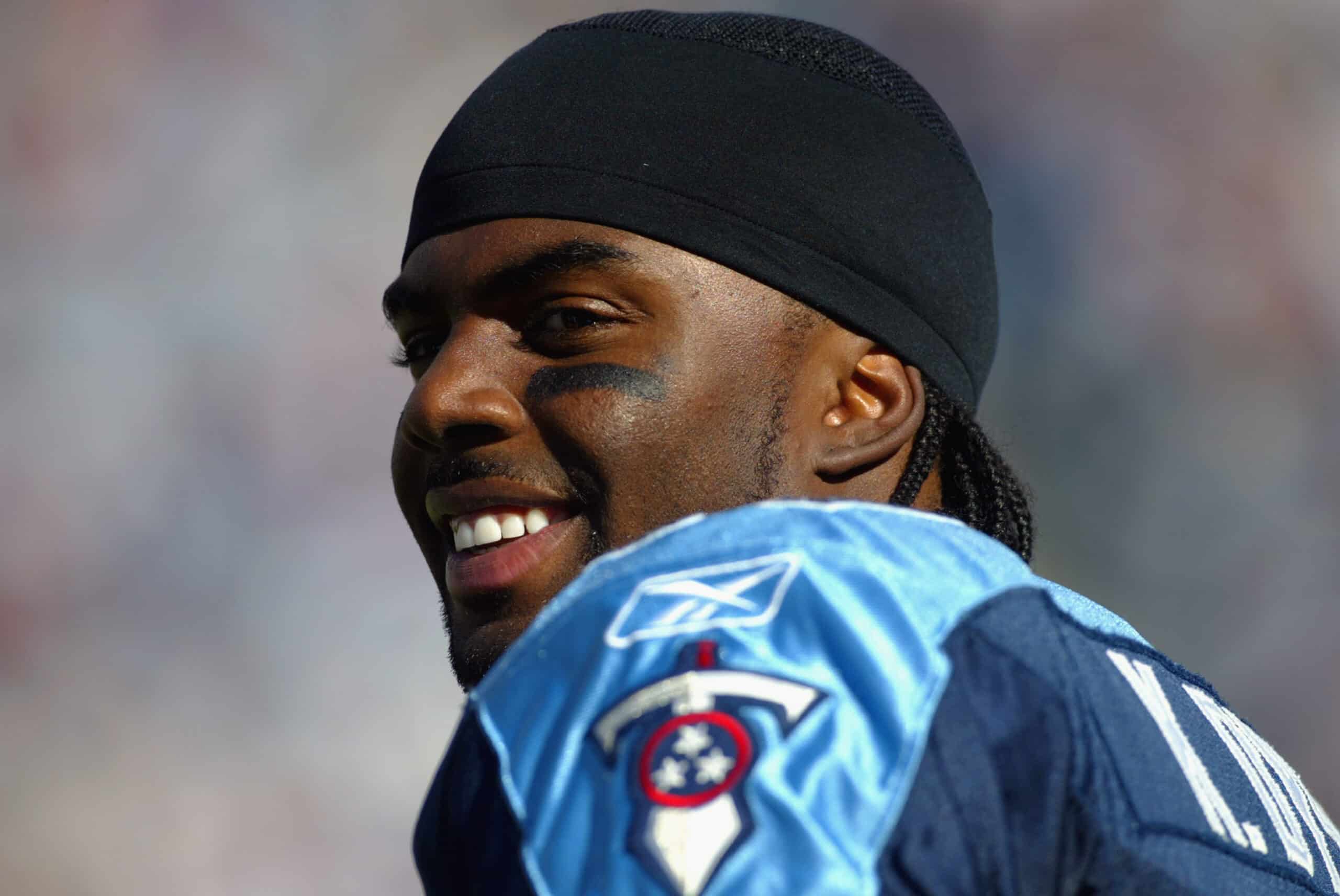 The Life And Career Of Kevin Dyson (Complete Story)