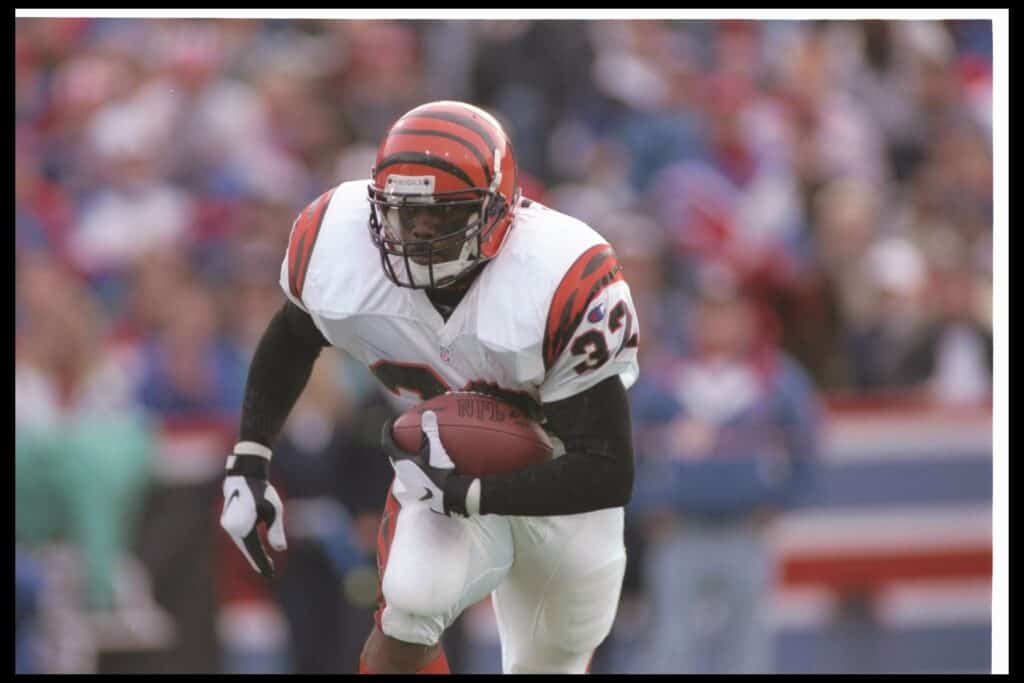 When Ki-Jana Carter took the college football world by storm, many experts thought he had Barry Sanders-like potential.

Carter was like a powerful gazelle with an incredible first step during his Penn State days.

Regrettably, he never got to show his true potential on the NFL gridiron when a freak injury during his rookie season turned him into a shadow of his old self.

The man with the Barry Sanders upside quickly became the second coming of Ickey Woods.

It was a recurring and painful theme for long-suffering Cincinnati Bengals fans.

It was deja vu all over again.

Football Stud With A Unique Nickname 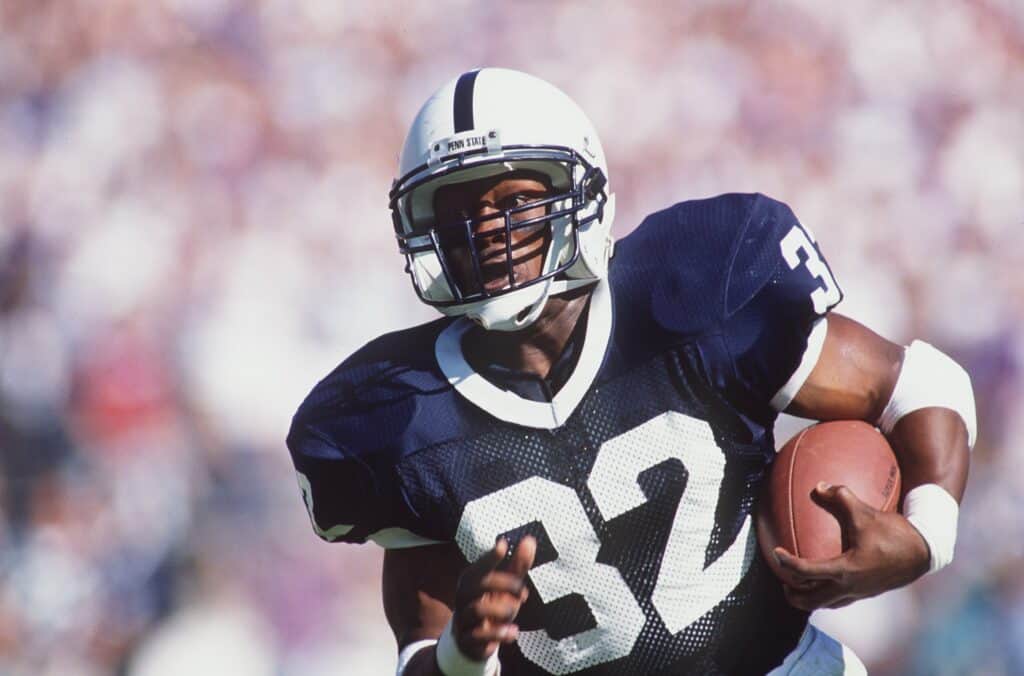 Kenneth Leonard “Ki-Jana” Carter was born in Westerville, Ohio in 1973.

He got his nickname from a character in the movie “Shaft in Africa” which hit theaters a few months before his birth.

Carter was a three-sport star at Westerville South High School, excelling in football, track, and basketball.

It made perfect sense: he’s a native of Columbus and the state school is just a stone’s throw away.

To his and the fans’ dismay, Carter committed to Joe Paterno’s Nittany State Lions.

Some 25 years after the infamous decision, Carter explained to Cleveland.com’s Doug Lesmerises why he chose Penn State:

“It was tough leaving my hometown, because as you can imagine there was a lot of pressure and everything. I could have played 15 minutes from my hometown, and it would have made it easier for my mom to come watch me play.”

“But there were just other facets of school I wanted to be part of and enjoy and Penn State met all those requirements.”

“From a football program it’s a powerhouse, but the campus is like a small campus environment. I wasn’t into the big city school.”

“And going away from home I could grow up and gain a little independence and my mom could still come see me and bring me food when we had home games.”

Carter also said he was pleasantly surprised when the Nittany Lions already had several players from his home state of Ohio.

They took him under their wing even before he committed to Penn State.

Despite having some sleepless nights agonizing over his decision, Carter said playing for Joe Paterno’s team “turned out to be the right choice,” per Cleveland.com.

In Ki-Jana Carter’s freshman year at Penn State, he ran for 264 yards and four touchdowns on 42 carries in 11 games.

The Nittany Lions won seven of their 12 outings.

Carter improved during his sophomore season, running for seven touchdowns and 1,026 yards on 155 carries.

The Nittany Lions eventually received an invitation to play the Tennessee Volunteers in the 1994 Florida Citrus Bowl.

All of a sudden, Ki-Jana Carter morphed into beast mode during his junior year.

One of his best games was against his hometown Ohio State Buckeyes on October 29, 1994 at Beaver Stadium.

It was sweet vindication for Paterno and Co. who lost to Ohio State, 24-6, the previous year.

Carter dubbed the win over OSU in 1994 as “payback,” per Cleveland.com.

“Then the next year, being able to get that revenge against them, I’m glad we went undefeated.”

“I’d take that all day, but beating them like we did, and we did it in homecoming, which was very odd, because you don’t usually have a school like that for your homecoming game, to win like that was definitely payback.”

Carter punctuated his collegiate career and Penn State’s undefeated season with 156 yards on the ground and three touchdowns in the Nittany Lions’ 38-20 win over the Oregon Ducks in the 1995 Rose Bowl.

One particular play stood out.

With 10:50 left to play in the first quarter, a lumbering Carter ran over Oregon defensive back Herman O’Berry while the former was perpendicular from the line of scrimmage.

Carter made one sidestep and burst through the gap unscathed for an 83-yard touchdown.

“I didn’t see another player like him that year, anywhere,” Former Northwestern Wildcats head football coach Gary Barnett told The Cincinnati Enquirer’s Jim Owczarski in 2015. “In one step, he was full speed. He was the most explosive player in our league at the time. I mean there wasn’t anybody close.”

In the winter of 1995, Ki-Jana Carter decided to forego his senior season at Penn State to enter the NFL Draft.

He told the media at Beaver Stadium he didn’t want his 41-year-old mother, Kathy, to work any more.

The younger Carter pointed out his mother worked 15-hour days as a beauty salon owner near his high school to provide for him and his younger brother.

He wanted to return the favor when he turned pro.

He also said he will fulfill his promise to his mother of getting his business administration degree in June of 1995.

How about a three-fer. The number 1, 5, and 9 picks of the 1995 NFL Draft all out of Penn State. Ki-Jana Carter, Kerry Collins, and Kyle Brady. @PennStateFball pic.twitter.com/Z9d71byMsa

“I don’t think he can improve his situation athletically by coming back to Penn State,” legendary head football coach Joe Paterno told The Morning Call’s John Kunda. “He is ready for the next level.”

After his breakout junior year at Penn State where he ran for 1,539 yards and 23 touchdowns on 198 carries, Ki-Jana Carter served notice he was the best college player in the country.

Carter concluded his three-year stint at Penn State with 2,829 rushing yards and 34 touchdowns on 395 carries.

Unfortunately, he finished second to Colorado Buffaloes running back Rashaan Salaam in the 1994 Heisman Trophy voting.

Nevertheless, Ki-Jana Carter was ready to take the NFL by storm. 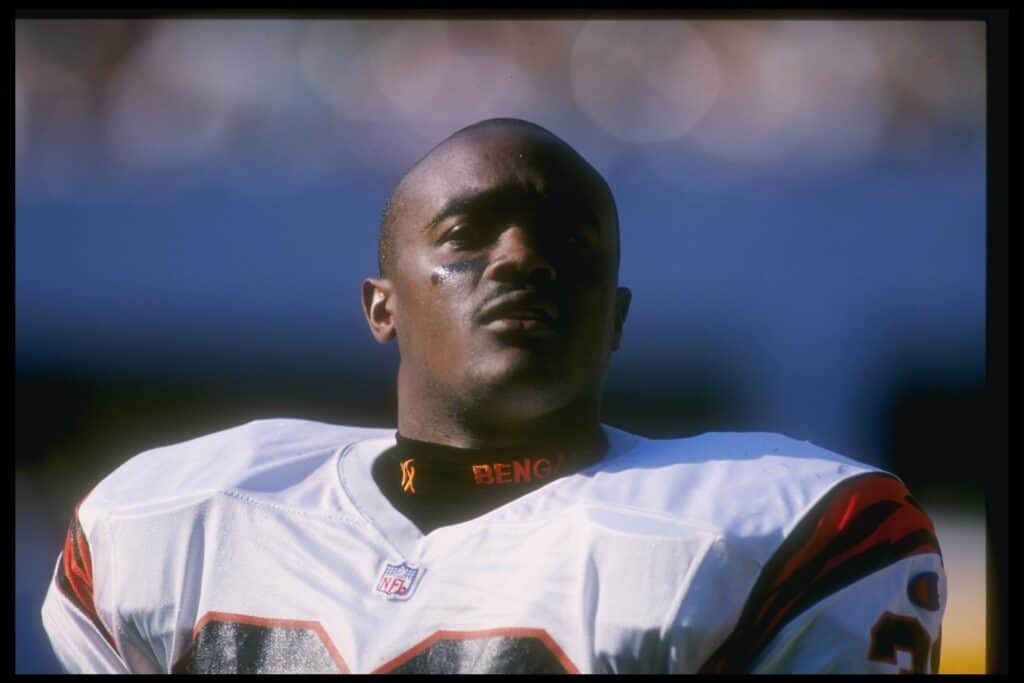 When Ki-Jana Carter decided to turn pro, he did some research.

He predicted he will be a Top 5 draft pick and earn $2 million in his rookie year, per The Morning Call.

The Cincinnati Bengals made Carter the first overall pick of the 1995 NFL Draft.

Cincinnati traded the fifth and 36th selections to the Carolina Panthers for the No. 1 draft choice.

Bengals owner and president Mike Brown revealed to The Cincinnati Enquirer twenty-two years later the team had originally planned to use the fifth pick for defensive end Kevin Carter and running back Curtis Martin.

It was a decision which would haunt them many years later.

DYK that Kenneth (Ki-Jana) Carter is the last RB to be drafted first overall? The @Bengals drafted him in the 1995 NFL Draft. #QUIZ: Can you name the RB who became a first overall pick before Carter in the 1986 NFL Draft? pic.twitter.com/m0w0cPWMeK

It was the biggest rookie contract in league history at the time.

“This is sweeter than winning the Heisman,” Carter told CincyJungle.com. “I grew up with the Bengals and the (Cleveland) Browns. I’m very excited because my family and my friends will be able to watch me play.”

With Carter aboard, Cincinnati hoped to turn its sagging fortunes around.

The Bengals missed the postseason for the fourth straight year.

They averaged just three wins during that stretch.

Could Ki-Jana Carter be their savior?

Alas, Carter suffered a season-ending ACL injury in his left knee during his first preseason game against the Detroit Lions at the Pontiac Silverdome.

In just his third carry of the game, Carter planted his left foot on the turf and attempted to cut right.

Unfortunately, his foot got caught in the turf, bending his knee severely.

“This is probably one of the worst days of my life,” a despondent Carter told The Los Angeles Times‘ Bill Plaschke. after the game “I’m deeply sorry.”

*Ki-Jana Carter – Torn ligament in his knee as a rookie

He made a valiant comeback attempt the following year.

The Bengals were a tad better during those years, winning a combined 15 games.

However, they still didn’t qualify for the postseason.

Since Carter’s return from his ACL injury, Corey Dillon and Garrison Hearst were primarily splitting carries for Cincinnati.

Carter ultimately flamed out in the Cincy Jungle, playing in just four total games with one measly touchdown in 1998 and 1999.

He dislocated his kneecap during a workout in January 2000.

The Washington Redskins took a chance on him a year later.

He suited up in 14 games and ran for 308 yards and three touchdowns on 63 carries.

Washington went 8-8 and missed the postseason.

Carter lasted just one year with the Redskins.

He eventually signed with the Green Bay Packers several months later but was released before the start of the 2002 NFL season.

Ki-Jana Carter was in limbo yet again.

The New Orleans Saints signed him a year later.

In 10 games spanning two seasons in the Bayou, Carter amassed a paltry 89 rushing yards on 29 carries and one touchdown.

During Ki-Jana Carter’s two-year stint with the Saints, they were a .500 team eliminated from postseason contention.

He eventually hung up his cleats after the 2004 NFL season.

Carter concluded his seven-year NFL career with 1,144 rushing yards and 20 touchdowns on 319 carries.

Ki-Jana Carter wasn't an #NFLDraft bust. He was just unlucky (so were the #Bengals). https://t.co/NTSrtMeLT4 pic.twitter.com/F2iIDUjSZf

NFL experts and aficionados have considered him a major bust.

Carter resented that label in the “Caught in the Draft: 1995” NFL documentary (via The Cincinnati Enquirer):

“It makes me mad a little bit. Does that make somebody a bust? It wasn’t ’cause of my talent. It was ’cause of injuries.”

“And it just so happened that it was one injury and they never really got to see the type of player I could have been in the league.”

He also told CincyJungle.com he has no regrets:

“I’m not going to hold no regrets. Do I wish my career would have happened better? Hell yeah, I do.”

“But at the same time, am I going to sit there and sulk and complain about what happened? No. I did all I could.”

Ki-Jana Carter, the man who had Barry Sanders-like potential when he was an NFL rookie, suddenly became an afterthought.

Despite an underwhelming NFL career, Ki-Jana career earned more than $15 million in seven total seasons with the Bengals, Redskins, and Saints.

He wisely used some of that money to establish ByoGlobe, a marketing and branding business, in Fort Lauderdale, FL.

ByGlobe’s clients in the sports industry include the Cincinnati Bengals, Cincinnati Reds, and Miami Dolphins.

The business has access to more than 500,000 various promotional items, per Carter’s LinkedIn page.

Carter spoke about his enthusiasm for his business with ASICentral.com’s Christopher Ruvo in 2017:

“With promotional products, anyone I talked to could utilize my services.”

“In this industry, like in football, you need to know your playbook in and out and have great teammates to be successful.”

Unfortunately, his company made headlines for the wrong reasons three years later.

Penn State Health (PSH) slapped him with a $935,000 lawsuit in December 2020 for ByoGlobe’s alleged failure to provide $2.4 million worth of surgical masks during the COVID-19 pandemic.

PennLive.com’s Matt Miller revealed some of the lawsuits details:

“ByoGlobe’s and Carter’s representations were false: no money was held in escrow.”

“PSH does not know where the $2,414,500 it wired to ByoGlobe ultimately went. PSH never received a single mask from ByoGlobe or its supplier.”

Carter did not return comments regarding the lawsuit to PennLive.com.

1st time in #Nawlins since '04 and the first thing I had to do is see my ex-teammate @TeamGleason #Saints #WhoDat pic.twitter.com/07qtBM4XyK

Nineteen years after his scintillating 156-yard, three-touchdown performance against the Oregon Ducks, he was inducted into the Rose Bowl Hall of Fame.

He was also a sports blogger and sideline reporter for a few years.

Carter participated in Champions for Children SWFL, an annual weekend golf tournament whose proceeds go to children in need in the local and national communities.

Carter and his family currently reside in Florida. 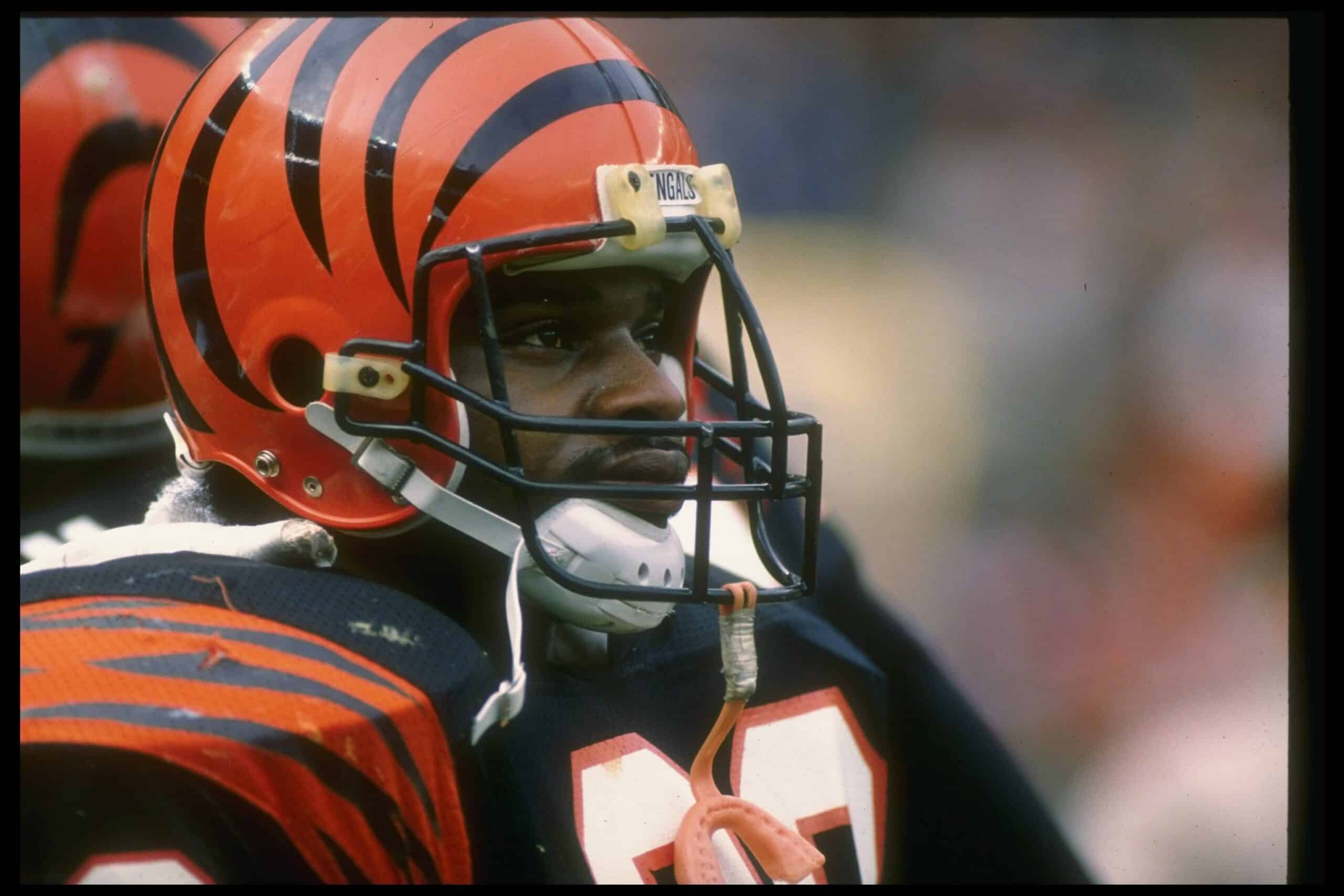 The Life And Career Of Ickey Woods (Complete Story) 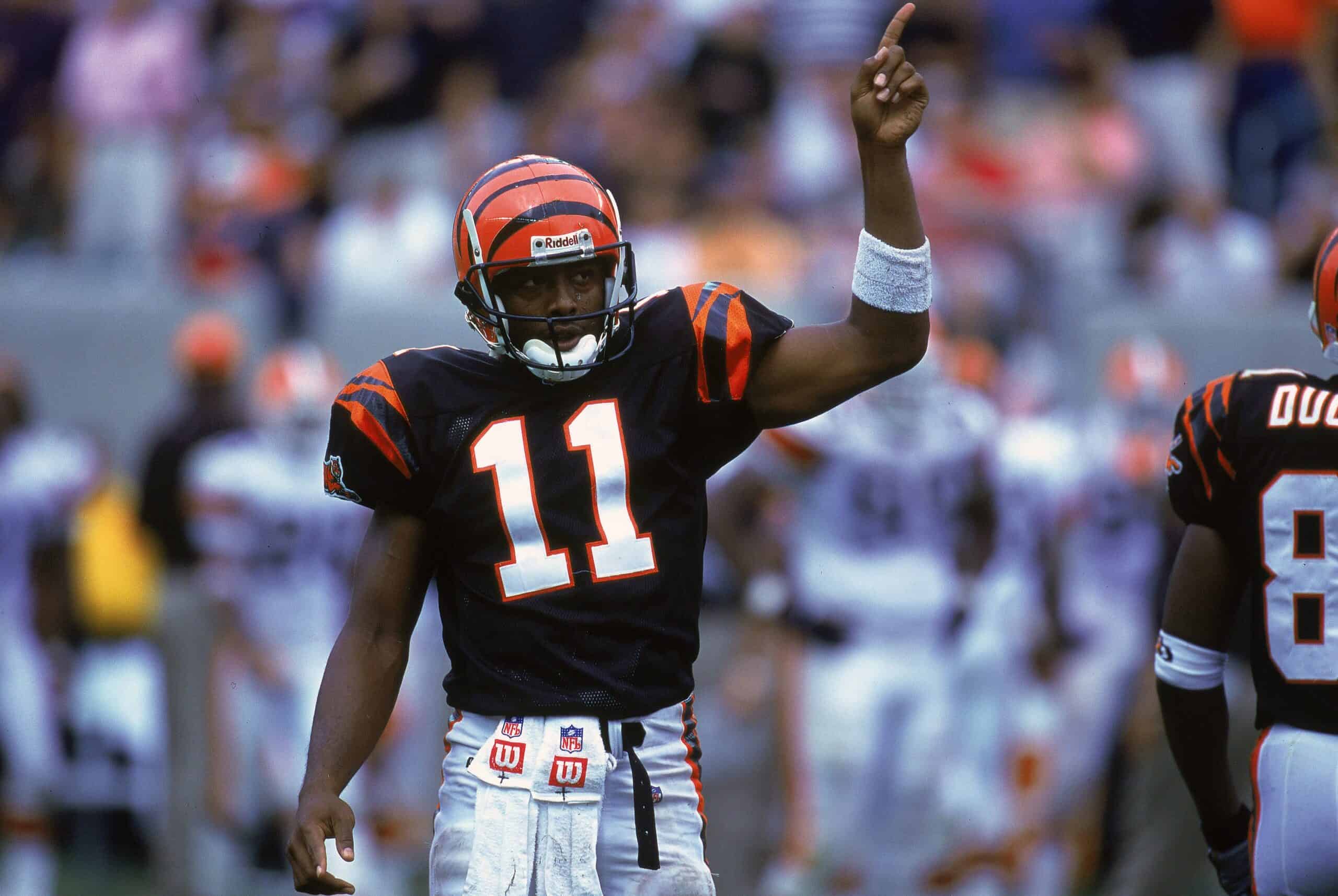 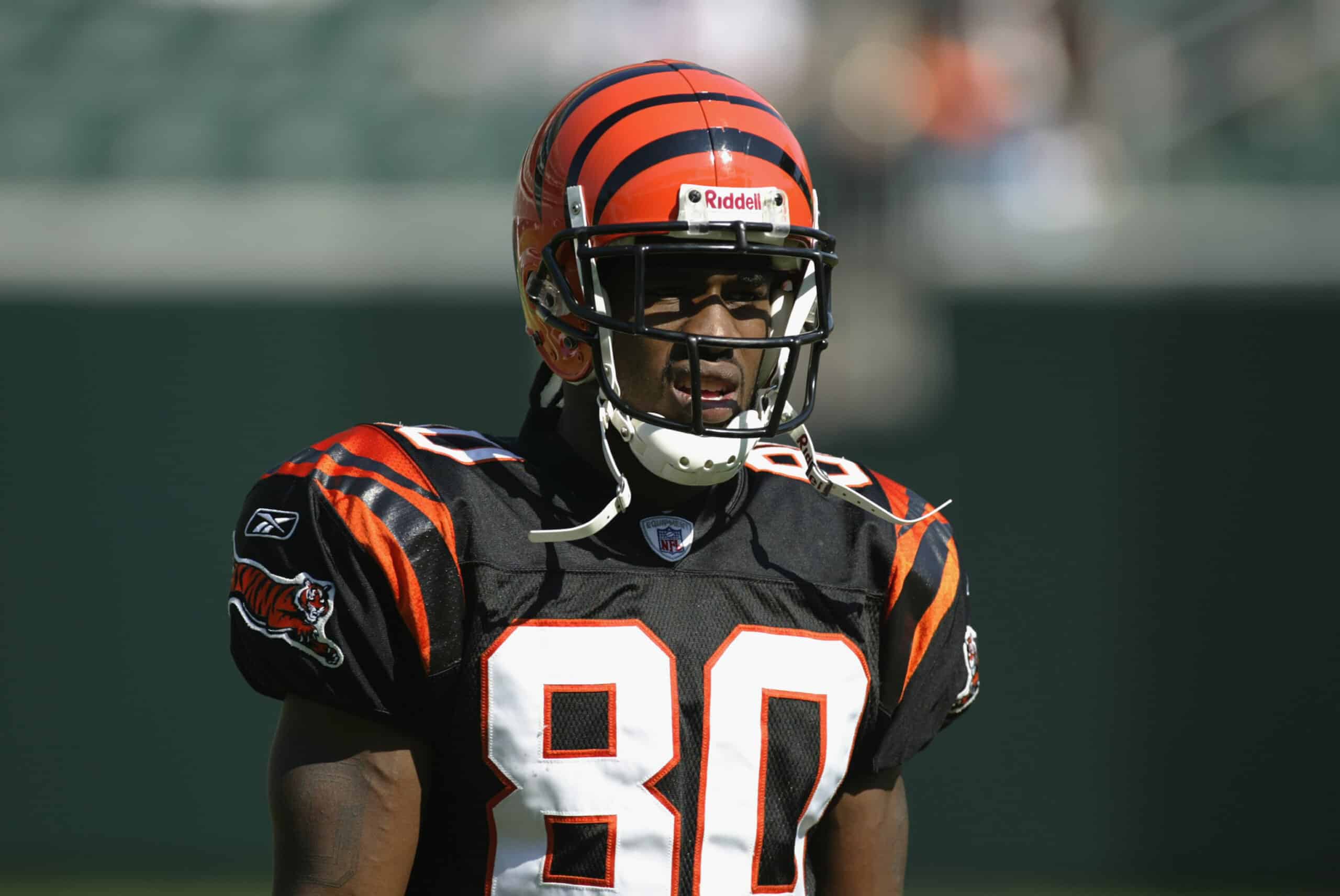