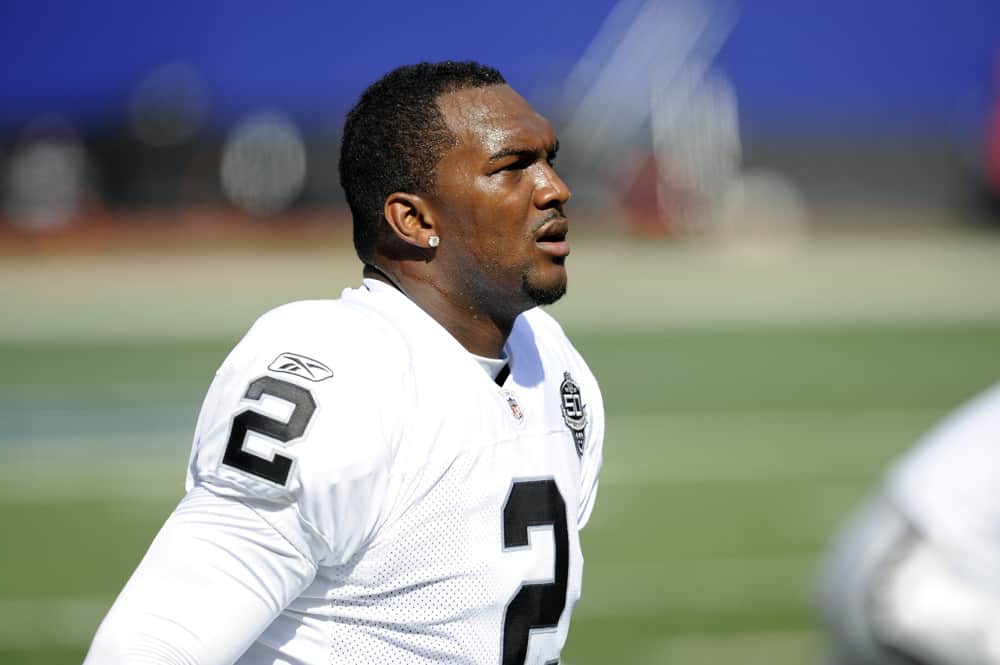 Looking back on it, maybe it should have been obvious that JaMarcus Russell could be a bust.

His play didn’t exceed the stats of other QBs on the roster who made starts around him.

In his junior year at LSU in 2006, Russell battled Matt Flynn and Ryan Perrilloux for the starting job.

After keeping the job, Russell made significant strides forward and posted the best season of his college career.

This took him from predictions of being a mid-round pick to the top of many draft boards.

The Oakland Raiders decided Russell could be their franchise QB and selected him No. 1 overall in the 2007 NFL Draft.

He didn’t enter an ideal situation as the Raiders were a dysfunctional franchise in the late-2000s.

Especially when reports came out later that his head coach, Lane Kiffin, didn’t even want the team to draft him.

Even so, a lot of blame goes on Russell for his role in falling short of the enormous expectations.

Reports of him being unfocused, lazy, and a fan of codeine syrup all came to the surface as he flamed out of the league.

Russell never lived up to his pre-draft hype and quickly washed out of the league.

Several comeback attempts failed and he’s most known for being one of the highest-paid busts in NFL history.

After taking his high school to the state championship game as a freshman, Russell started to receive scholarship offers.

Russell towered over kids at 6’3”, 185 pounds by age 15, and continued to break QB records in the state.

By the time his high school career ended, he was a 5-star recruit and held almost every Alabama high school quarterback record.

With offers from most of the top schools, Russell narrowed down his choices to a few SEC schools and Florida State.

A story of Russell slinging a ball 70 yards on his knees during a recruiting visit has become a legendary tale.

Russell committed to LSU under head coach Nick Saban and joined a roster stacked with talent.

In 2003, the Tigers won the BCS National Championship with Matt Mauck as quarterback and Russell as a redshirt freshman.

Marcus Randall received the bulk of the work in 2004 as a senior with Russell throwing for 1,053 yards, nine touchdowns, and four interceptions.

Saban left LSU to coach the Miami Dolphins in the NFL and Russell became the starter in 2005 under new coach Les Miles.

Even though Russell was the big man on campus, he didn’t definitively own the quarterback position.

Matt Flynn impressed any time he took the field in relief of Russell.

The most damning moment for Russell’s star power came in the 2005 Peach Bowl when Flynn led a 40-3 win over Miami with Russell injured.

A quarterback controversy started in Baton Rouge in the offseason as the roster kept getting deeper at the position.

With the uncertainty that he’d be the starter, rumors began to swirl that Russell would declare for the draft at the end of the 2006 season.

After holding off Flynn and Perrilloux to secure the starting job, Russell started off strong with the Tigers.

After a tough loss in a defensive battle to Auburn, Russell’s low point of the season came against the Florida Gators.

Russell tossed three interceptions in a 23-10 loss but rebounded with a seven-game winning streak to close out the season.

The Tigers kept winning and Russell’s shaky performances fell from the memories of scouts by season’s end.

After an impressive bowl game victory, Russell prepared for his pro day and the NFL Combine.

Media members gushed over Russell’s performance in his pro day.

“I can’t remember being in such awe of a quarterback in my decade of attending combines and pro days. Russell’s passing session was the most impressive of all the pro days I’ve been to,” ESPN analyst Todd McShay said to Sports Illustrated in 2007.

His rocket arm, imposing size, and physical gifts locked up the belief that he should be the top pick.

A Holdout then a Flame Out

In 2007, it was still common for the occasional top draft picks to holdout before inking a deal with the team that drafted them.

Russell held out until Week 2 before signing a six-year, $68 million contract with more than $30 million guaranteed.

This Date, 13 Years Ago: Raiders take Jamarcus Russell with the first pick. Made $39 million, or $1.56 million per career start. pic.twitter.com/lcoffraCq4

A common reference by media and league sources is that Russell’s contract is why the rookie wage scale was implemented in 2011.

Josh McCown made the start in Week 1 and kept the job the entire season over Russell.

In Week 17 with the Raiders out of playoff contention, Russell started his first NFL game against San Diego.

Russell posted average numbers for a rookie’s first start: 23-for-31, 224 yards, one touchdown, and one interception.

Heading into 2008, Russell was named the starter for the Raiders but the team around him was in turmoil.

Russell struggled to live up to his expectations and completed fewer than 50 percent of his passes in six games.

He finished 26th in yards and 22nd in touchdown passes in the league in 2008.

The Raiders ran the ball slightly more effectively but still had the 29th ranked offense overall.

Russell gave Raiders fans a bit of hope to believe in him after improving his performance at the end of the season.

In the final three games of 2008, Russell threw six touchdowns to two interceptions.

Head coach Tom Cable played musical chairs with Russell, Gradkowski, and Charlie Frye for the remainder of the season.

Once the offseason arrived, the Raiders decided it was time to move on from Russell.

He finished with 18 touchdown passes, 23 interceptions and never threw more than 277 yards in his 25 starts.

JaMarcus Russell didn’t have many teams interested in him based on news spreading around the league.

Reports that Russell had a lethargic approach to game preparation and practice surfaced and turned most teams away.

One of the most memorable stories of the JaMarcus Russell era details his Raiders’ coaches given him blank tapes because they didn’t think he was watching the film for game prep.

During the JaMarcus Russell days, Raiders coaches didn’t believe he was watching film.

So they gave him blank tapes.

The next day, he came in saying he watched “blitz packages.”

Again, they were BLANK.

It didn’t help that Russell was arrested for codeine possession without a prescription in June 2010.

“I could’ve went about certain things differently,” Russell said on Showtime’s “Inside the NFL” in 2010. “I’m not sure where they went wrong. But the things that did go wrong, I take full blame for whatever was my fault, and the things that did happen. Being drafted No. 1, it’s so much they want you to do at a snap of a finger. It didn’t happen that way.”

After being released and arrested, Russell sought assistance to repair his image.

That’s when he teamed up with former NBA player and life coach John Lucas.

Russell received tryouts with a few teams heading into the 2010 season but didn’t receive any contract offers.

The depression of falling short of his NFL dream sent Russell ballooning toward 315 pounds.

He didn’t throw a football consistently for three years before making a comeback attempt in 2013.

He worked to return to playing shape and got down to 265 pounds.

No offers came his way, even with the media exposure.

Next, Russell tried one more time with a letter-writing campaign to teams in 2015.

It wasn’t simply playing quarterback but Russell was open to any role a team would give him.

“I am willing to lead the scout team for free for one year just to get the experience in your system,” he penned to Dallas Cowboys owner Jerry Jones, according to Sports Illustrated.

Russell wrote letters to all 32 teams and said he’d play for free but didn’t receive any interest.

His NFL career had been over for nearly five years but he didn’t want to accept it.

A paradox appears as you learn more about JaMarcus Russell.

He desperately loves football but didn’t seem to do the necessary work to stick around.

After several comeback attempts in the NFL failed, he settled for coaching his high school alma-mater.

He’s been the quarterback coach at Williamson High School since 2018.

The state records are still in his name and he’s a living legend in Mobile, Alabama.

JaMarcus Russell came in to check on the Tigers. #ForeverLSU pic.twitter.com/16zLmtgIMA

His coaches in LSU, both Nick Saban and Les Miles seemed pleased with how he performed there, too.

“I had to have him ready to roll and at practice on time, meetings, he was the leader of my team,” Les Miles said to Jim Rome in 2010. “I’m going to tell you right now, I enjoyed having him quarterback my team. Now to say that’s how it went when he went to the NFL, it would be inappropriate for me to suggest how it went when I wasn’t there.”

Maybe the spotlight was too big for Russell and the demands of being the top pick were too large.

It’s possible his focus waned when he finally received a big paycheck that afforded him things he never dreamed of.

The story of a big-time NFL bust is never straightforward.

Most of the narrative around Russell has turned into him being lazy or not wanting it enough.

His persistent attempts at a comeback showed an appearance to make a change.

It appears now that Russell’s only route back to the NFL now would have to be through coaching.

The Life And Career Of Ray Guy (Story)

The Life And Career Of Rich Gannon (Story)

The Life And Career Of Art Shell (Story)

The Life And Career Of Matt Millen (Story)

The Life And Career Of Terrelle Pryor (Story)

The Life And Career Of Lester Hayes (Story)

The Life And Career Of Fred Biletnikoff (Story)

What Happened To Nnamdi Asomugha? (Story)

The Fast Life And Career Of Ken Stabler (Complete Story)

What Happened To John Matuszak? (Story)

The Life And Career Of Billy Cannon (Complete Story)

The Life And Career Of Charles Woodson (Complete Story)

The Life And Career Of Willie Brown (Complete Story)