The mantra adorns the neckline of Carolina Panthers jerseys, banners hang in Bank of America Stadium with the saying, and fans post #KeepPounding with tweets about the team.

Sam Mills not only coined the term, but he lived it.

A diminutive linebacker from a small college in New Jersey left a large legacy on the NFL.

He served as one of the members of the New Orleans Saints’ vaunted “Dome Patrol” squad in the early 90s.

Mills finished his playing career with the Panthers before transitioning to be a coach on the team in 1998.

His performance on the football field deserved adoration, but his determination off it got him immortalized.

Mills was diagnosed with intestinal cancer in 2003 and passed away 17 months later.

His statue outside Bank of America Stadium, his bust in the Pro Football Hall of Fame, and his words “Keep Pounding!” continue his legacy nearly two decades later.

This is the story of Sam Mills.

Mills was the youngest child of Juanita and Sam Mills Sr.

During his childhood, Mills tagged along with his older brother and got used to being the smallest kid in sports.

His determination to hang with bigger kids drew him to the football field and wrestling mat.

He held his own on the football field, but his 5’9” frame did not draw much attention from scouts.

He walked on to the Division-III football program in 1977 and made a quick impact on the field.

By the end of his sophomore season, Mills was noted as the best defensive player in New Jersey by the State’s Collegiate Writers and accumulated records for the Red Hawks.

The man who taught us all to #KeepPounding is finally in Canton! pic.twitter.com/b7KmxzAf3T

“He’s the best football player we’ve ever had here,” Giancola said. “People may have doubted him saying he was ‘too small,’ but because of his perseverance, he was able to overcome all the obstacles.”

A handful of school records and regional recognition weren’t enough to get Mills drafted to the NFL when he graduated college in 1980.

His height once again became a barrier that he’d need to overcome.

After going undrafted, Mills received a chance on an NFL roster with the Cleveland Browns.

As Mills had been told throughout his football life, Rutigliano decided he was too small to compete at the NFL level and cut him.

After a failed attempt to make the Canadian Football League’s Toronto Argonauts, it looked like the pro football dream for Mills might be over.

He returned to New Jersey and taught photography and assisted with the football team at East Orange High School.

Rutigliano reached out to an old friend in the USFL to suggest Mills gets a shot in the upstart league.

Carl Peterson, general manager of the Philadelphia Stars, reached out and brought Mills in for a chance to make the roster.

Mills quickly earned the nickname “Field Mouse”, a focus on his diminutive size.

“He was a mouse running around a field of elephants,” Peterson said in Jeff Pearlman’s book Football For A Buck: The Crazy Rise and Crazier Demise of the USFL. “But, the elephants wanted nothing to do with him.”

The 24-year-old Mills made an immediate impact on the Stars and was viewed as one of the team’s best players.

Mills earned All-USFL Honors in each of his three seasons with the Stars, who moved to Baltimore in 1985.

A bout of legal and financial struggles among the league’s teams caused it to fold after the 1985 season.

One of the largest beneficiaries of the league folding would be the NFL’s New Orleans Saints, who signed Mills and his Stars’ teammate Vaughan Johnson.

Former Stars’ head coach Jim Mora also made the jump from the USFL to the Saints.

The New Orleans Saints hadn’t posted a winning record in its nearly 20-year history when Mills and Mora joined the team in 1986.

Before their arrival, the Saints allowed nearly 25 points per game in 1985.

OLB Rickey Jackson had three Pro Bowl appearances from 1981-1985 and served as the team’s only defensive bright spot.

That immediately changed with the addition of Mills, Johnson, and Pat Swilling to join Mora and defensive coordinator Steve Sidwell’s 3-4 defense.

“He had everything you wanted in an inside linebacker,” Capers said before adding. “Except height.”

The Saints made the playoffs for the first time in 1987.

Mills was the only linebacker in the Dome Patrol to make the Pro Bowl that season.

While New Orleans lost in the first round of the playoffs, Mills had established himself as an NFL player.

Following his breakout season, Mills posted 105 tackles and returned to the Pro Bowl in 1988.

The Dome Patrol coalesced as one of the best units in football and helped the Saints make the playoffs three-straight seasons from 1990 to 1992.

Swilling left the Saints after the 1992 season, and Johnson and Jackson followed in 1993.

Mills missed 7 games during the 1993 season and needed surgery to repair a knee injury.

He played the full season in 1994, but the Saints hesitated to re-sign the 36-year-old linebacker after the season.

The expansion Carolina Panthers signed Saints linebacker coach Vic Fangio to be its defensive coordinator, and he wanted Mills to follow him to the new franchise.

Pounding with the Panthers 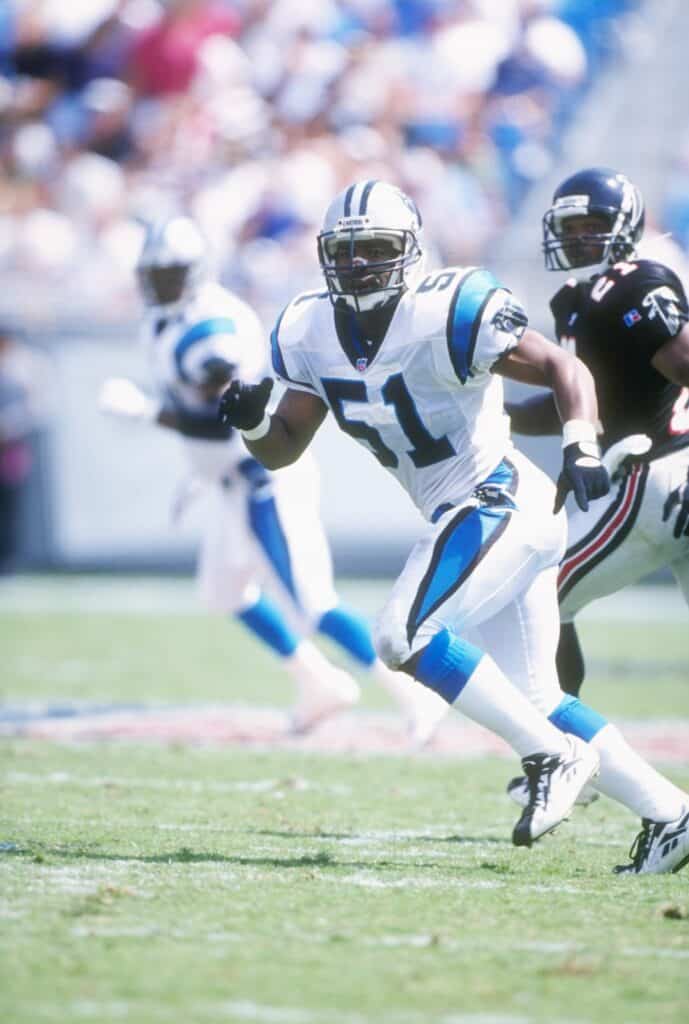 “As soon as we got to Carolina, we started putting together a preferred list of free agents, and he was on it,” Polian said of Mills. “We knew we had to compete early, and Dom and Vic stood on the table for him. In fact, they stood on their heads on the table for him; that’s how emphatic they were. The minute his name came up, it’s like, ‘Yeah, let’s do it.’

Fangio implemented the same system in Carolina that he learned from Steve Sidwell in New Orleans.

Mills became an immediate locker room leader because of his familiarity with the system.

After a 0-5 start, Mills made his first major impact on the Panthers franchise.

He intercepted New York Jets quarterback Bubby Brister and returned the pick for a touchdown.

The Panthers won, 26-15, and tallied three-straight wins after their first win in franchise history.

A 7-9 record served as a solid start for the expansion team and built momentum heading into 1996.

Mills led the Panthers in tackles (122) in 1996 and served as the soul of the defense en route to his fifth and final Pro Bowl selection.

Once again, Mills received Defensive Player of the Year votes and finished tied for fourth in the voting.

Carolina won the NFC West with a 12-4 record and earned a first-round bye in the playoffs.

With the Panthers leading 26-17 and the Cowboys driving, Mills sealed the game with an interception on Troy Aikman with three minutes remaining.

🏈 If you’re a @Panthers fan, the team’s 1st playoff win Jan. 5, 1997, is must-watch #sports #history. 📷: Sam Mills intercepted Cowboys QB Troy Aikman in that game (and would pick off Packers QB Brett Favre in a loss the next week). 🎥: https://t.co/f9xdPzPjeP#TBT #Throwback pic.twitter.com/divLTp8Aos

The win sent the Panthers to the NFC Conference Championship against the Green Bay Packers.

The “Frozen Tundra” of Lambeau Field lived up to its hype with single-digit temperatures at the start of the game.

Carolina kept the game close through the first half and trailed 17-10 at the intermission.

The cold temperatures and two interceptions by Panthers QB Kerry Collins blew the game open for the Packers in the second half.

Green Bay advanced to the Super Bowl and the Panthers’ sophomore NFL season came to an end.

Mills retired after the 1997 season with the Panthers.

He decided to stick around Charlotte and became a coach for the Panthers in 1998.

Mills became a defensive coaching assistant in 1998 for the Panthers and stayed on the coaching staff once Capers and Fangio left after the season.

With George Seifert as head coach from 1999 to 2001, the Panthers struggled to find success.

After a 1-15 season in 2001, Seifert was fired and Mills worked under his third head coach, John Fox.

The Panthers finished 7-9 in Fox’s first season but notched four wins in its final five games of the 2002 season.

Heading into the season with low expectations, the Panthers started 6-1 capped by an OT win against Mills’ former New Orleans Saints.

While the Panthers were starting the season strong, Mills received devastating news that would change his life.

He was diagnosed with intestinal cancer at the beginning of the season.

The doctors told him he only had a few months to live.

As the Panthers kept rolling toward an 11-5 record, Mills battled his diagnosis off the field, focused on not distracting his players on their run.

The Dallas Cowboys, the team that Mills helped beat in the playoffs in 1996, would be the Panthers’ playoff opponent.

On January 2, 2004, two days before the game, Mills gave the team a speech that echoes nearly 20 years later.

“When I found out I had cancer, there were two things I could do: quit or keep pounding,” Mills said to about 100 people in the locker room. “I’m a fighter. I kept pounding. You’re fighters, too. Keep pounding!”

The words immediately stuck with the players and invigorated them to fight for their ill coach.

“It was simple, but that was Sam,” former Panthers safety Mike Minter said. “The great speeches aren’t great moments until later. Everybody who left the field that day knew.”

Carolina took that momentum to defeat Dallas, St. Louis, and Philadelphia on their way to the franchise’s first Super Bowl appearance.

Mills stood on the sidelines as the team faced the New England Patriots in the Super Bowl.

The Panthers’ run came up short as Adam Vinatieri kicked a game-winning field goal for the Patriots.

Mills returned to coach the next season while fighting cancer and passed away on April 18, 2005.

The legacy created in those two words has carried on to contribute to cancer research initiatives in the Carolinas.

The Keep Pounding 5k and Online Auction are held annually.

I had the joy of working on this piece w/ @Luv2telgoodnews about the deeper meaning of #KeepPounding in 2015 when the Panthers were headed to SB 50. It was such a special time in the QC & one that brought everyone together & reminded us of the true meaning of Sam Mills' legacy. pic.twitter.com/3nM4c4nBQ1

In 2012, the Panthers unveiled the “Keep Pounding” drum which is hit before each home game.

Many former players, celebrities, and cancer survivors have banged the drum, including Mills’ family.

“When we first started it (in 2012), people didn’t really know how to take it,” said Sam Mills III “But now, that drum has come to signify the starting bell of a heavyweight fight. Every Sunday, we’re in a heavyweight fight, and when someone hits that drum, it’s time to go.”

The drum, the insignia in the neckline of the jerseys, a bronze statue in front of the stadium, and his No. 51 retired to the Hall of Honor all carry on Mills’ legacy in Carolina.

The New Orleans Saints honored Mills in its Hall of Fame and Ring of Honor along with his Dome Patrol teammates.

His son, Sam Mills III, followed his father’s footsteps and coached with the Panthers from 2005 to 2019.

What Happened To DeAngelo Williams? (Story)

The Life And Career Of Muhsin Muhammad (Complete Story)

The Life And Career Of Michael Bates (Story)

The Life And Career Of Nick Goings (Story)

The Life And Career Of Charles Johnson (Story)

The Life And Career Of Steve Smith, Sr. (Story)

The Life And Career Of Luke Kuechly (Complete Story)