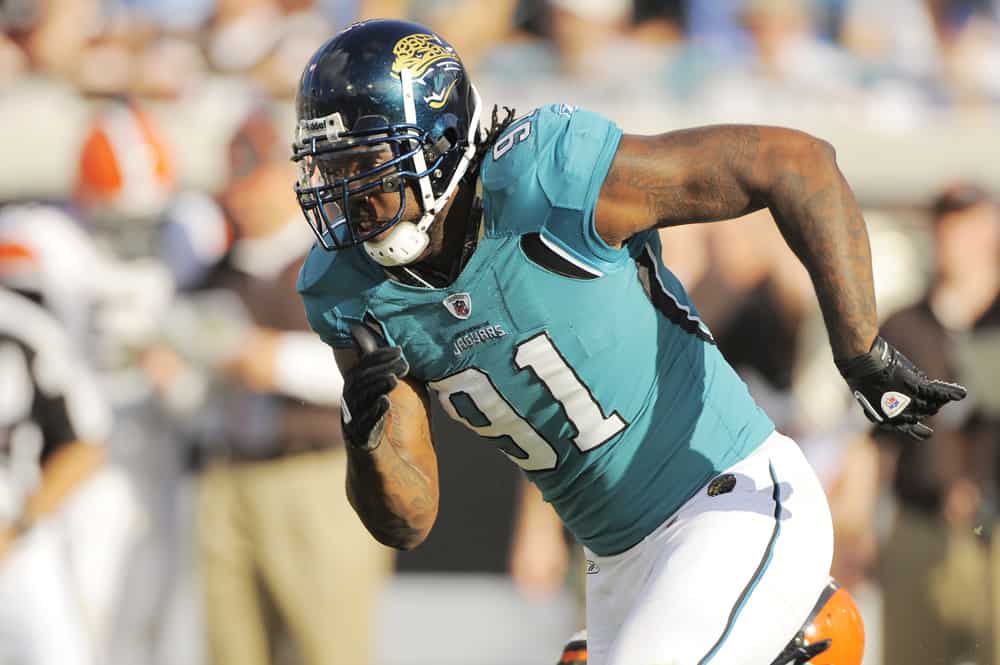 Those are the words that aptly describe Derrick Harvey’s disappointing NFL career.

Harvey, a highly-touted 6’5″, 268-lb. defensive end who won Defensive MVP National Championship Game honors with the Florida Gators in 2007, just couldn’t get over the hump in the pro ranks.

The Jacksonville Jaguars took a chance on him with the eighth overall selection of the 2008 NFL Draft.

No matter how hard they tried, they couldn’t get the best out of Harvey.

They even asked him to take on linebacker duties in a 3-4 defensive scheme, to no avail.

Regrettably, Derrick Harvey will go down in history as one of the biggest busts in Jacksonville Jaguars history.

Derrick Harvey was born in Greenbelt, MD on November 9, 1986.

Harvey was a late bloomer on the gridiron: he started playing high school football for the Roosevelt Raiders during his junior year.

It didn’t take him long to make a massive impact.

Harvey, a 6’5″, 268-lb. defensive lineman with an incredible 82-inch wingspan, wreaked havoc on the football field as a senior.

He had 150 tackles, five forced fumbles, two fumble recoveries, and five passes batted down that year.

Behind Harvey’s exploits on the defensive line, the Raiders won twelve of thirteen games in 2003.

The Raiders also reached the 4A state semifinal round.

Harvey piled up some impressive accolades once he wrapped up his high school football career.

On the other hand, USA TODAY named him to its Second Team All-America defensive selection.

Harvey was also a member of the TheInsiders.com First Team All-Atlantic Region selection.

SuperPrep’s All-America issue rated Harvey the No. 1 prospect in the country.

Derrick Harvey was a Raiders basketball letterman for two years.

The Miami Hurricanes also had Harvey on their radar.

Unfortunately, the Hurricanes’ lineup was already teeming with defensive linemen.

That didn’t sit well with Harvey, who wanted to make a solid impact from the get-go.

Harvey crossed Miami out of his shortlist.

“Derrick is a smart kid and is carefully looking at depth charts and things like that to see how he would fit in.”

“That’s why he dropped Miami, because they told him he wouldn’t be able to compete for a spot for a couple of years because they have so many young linemen.”

“He appreciated the honesty and thanked them, but he’s really interested in competing now.”

Houchens, who convinced Harvey to make the switch from basketball to football, stressed the big man wanted to join a school that needed pass rushers.

The Raiders defensive end also preferred a team that employed a 3-4 defense – the kind of defense that features three defensive linemen and four linebackers – because he could bulk up to 270 lbs. and excel in that kind of setup, per Rivals.com.

Choosing a school to play for is not an easy process.

In fact, it can be agonizing for many players. Harvey was no exception.

He announced his decision before a nationwide television audience on ESPN on February 3, 2004.

“I’m excited about it,” Harvey told Farrell. All the schools I visited and the coaches I met, I liked them all. This has not been an easy decision at all.”

In the next few years, Harvey would not only re-write Florida’s record books, but he would also help bring the program to national prominence once again.

College Days With The Florida Gators

Derrick Harvey majored in anthropology at the University of Florida.

Harvey, Mincey, and Siler went on to play in the National Football League.

The Gators won seven of twelve games that year.

As a redshirt freshman, Harvey played in nine games during the 2005 NCAA season.

He recorded three of his six tackles for the year on that day.

Harvey also finished his redshirt freshman campaign with one sack and one pass defensed.

Derrick Harvey registered one tackle in the victory.

Harvey would serve notice he’s one of the nation’s best defensive linemen during his redshirt sophomore campaign during the 2006 NCAA season.

He recorded four tackles, two sacks, and his first career fumble recovery in the Gators’ 27-17 loss to the 11th-ranked Auburn Tigers on October 14, 2006.

Harvey recorded a career-high five tackles and a sack in the Gators’ 25-19 victory over the Vanderbilt Commodores the following week.

He had three tackles in Florida’s 38-28 win over the Arkansas Razorbacks in the SEC Championship Game on December 2, 2006.

With Harvey terrorizing whatever offense came his way, Florida won thirteen of fourteen games during the 2006 NCAA season.

It was the first time the Gators won thirteen games in their ninety-four-year history.

Harvey finished his redshirt sophomore season with 35 total tackles, 13.5 tackles for loss, 11.0 sacks, one fumble recovery, and one forced fumble in fourteen games.

These performances were just a prelude to the greatest game of Derrick Harvey’s college football career: the 2007 BCS National Championship Game.

Standing in the Gators’ way were the No. 1-ranked Ohio State Buckeyes.

Smith fumbled the football. Harvey scooped up the loose ball and returned it to the Buckeyes’ five-yard line.

The Gators hung on to win their second national title, 41-14.

The Gators became the first Division I program to hold the men’s basketball and football titles simultaneously.

For his part, Urban Meyer became just the second football coach in NCAA history to lead his team to the national title in just his first or second year on the job, per the Gators’ official athletics website.

Harvey, who was a member of the Second Team All-SEC, also made a bit of history himself.

Harvey was responsible for three of the Gators’ five sacks on 2006 Heisman Trophy-winning quarterback Troy Smith.

Harvey entered his redshirt junior campaign in 2007 as one of the most feared edge rushers in the nation.

In October of that year, Harvey admitted to the University of Florida Sports Information Department’s Meghan Gannon, he felt more at home in Gainesville after considering leaving during his first year on campus.

However, he soon formed a tight friendship with Gators tight end Cornelius Ingram and eventually felt more at home in The Sunshine State.

At this stage in Harvey’s football career, Meyer lauded his work ethic and leadership, per Gannon:

“My expectations are as high as his and so is our defensive coaches. Derrick is above and beyond where we thought he’d be as a leader and a football player. He goes as hard as he can and he’s got a tremendous future.”

He was named to the Lott Trophy, Hendricks Award, and Maxwell Award Watch Lists.

Even though Harvey commanded more double teams in 2007, he still finished the year with 31 solo tackles, 49 total tackles, 17.0 tackles for loss, 8.5 sacks, five passes defensed, and one forced fumble in thirteen games.

The Gators won nine of thirteen games in 2007.

Unfortunately, ninth-ranked Florida lost to the Michigan Wolverines in the 2008 Capital One Bowl, 41-35.

Derrick Harvey, who had eight total tackles against Michigan, played in his final college football game.

Harvey decided to forego his redshirt senior season at Florida and declare for the 2008 NFL Draft.

Harvey’s career 51.5 tackles for loss is the third-most among the Gators’ all-time defensive players.

Regrettably, Derrick Harvey never lived up to the massive hype during his professional football career.

The Jacksonville Jaguars won an impressive eleven games during the 2007 NFL season.

That equaled the third-most wins in a single season in franchise history.

However, the departures of Marcus Stroud, Bobby McCray, and Grady Jackson left some glaring holes in the Jags’ defensive line for the upcoming 2008 NFL season.

With that in mind, Jacksonville set its sights on snagging can’t-miss defensive end prospect Derrick Harvey from the draft pool.

Jaguars head coach Jack Del Rio desperately wanted Harvey. He traded four picks to the Baltimore Ravens so his team could move up to the eighth spot.

It was a move that made the Jaguars look foolish for taking a chance on Harvey more than a decade later.

Nevertheless, NFL Commissioner Roger Goodell made it official on the podium: the Jacksonville Jaguars made Derrick Harvey the eighth overall selection of the 2008 NFL Draft.

Harvey, who became the first defensive end the Jaguars drafted in the first round, welcomed the opportunity.

“Whatever my role will be, special teams, defensive end, it doesn’t matter,” Harvey told NFL.com. “I’m just trying to help the Jacksonville Jaguars win more games than they did last year.”

Harvey held out of his Jaguars contract for thirty-three days, setting a rookie franchise record.

Consequently, he missed the entirety of training camp and three preseason games.

Harvey’s holdout incensed Del Rio, who felt the turn of events was “a little frustrating,” per ESPN.

He had a so-so rookie campaign with the Jaguars.

His best game of the year was a seven-tackle and two-sack performance against the Baltimore Ravens on December 28, 2008.

Harvey put up decent stats in his second year on the NFL gridiron.

He recorded 57 total tackles, 44 solo tackles, two sacks, and one fumble recovery in 2009.

However, he never had the breakout year many Jaguars fans expected.

Some pundits credit that to the various changes Jacksonville made on defense as the season wore on.

Harvey even saw time at outside linebacker when the Jags were on a 3-4 alignment.

When the opposition executed a pass play, Harvey lined up at defensive tackle in a 4-3 defensive scheme.

The changes apparently took a toll on Derrick Harvey’s NFL career. It was hard for a second-year player to keep up with that many.

Jacksonville won just seven games in 2009 and missed the postseason for the eighth time in the past ten years.

Harvey registered the worst statistical year of his Jacksonville Jaguars tenure in 2010.

He finished the year with 12 total tackles, 11 solo tackles, and 2.5 sacks in fifteen games.

The Jaguars were just a tad better than the previous year. They had a mediocre 8-8 win-loss record in the 2010 NFL season.

Former Florida #Gators DE Derrick Harvey will move to left end for the Jacksonville #Jaguars when they switch to an attack 4-3 next season.

On that day, Del Rio benched Harvey for misreading a run play that allowed Kansas City Chiefs running back Thomas Jones to rack up 70 yards.

Harvey’s gaffe allowed Kansas City to score its first touchdown of the game.

The move allowed Harvey to reunite with his Florida Gators teammate and Broncos quarterback Tim Tebow.

The change of scenery and reunion with Tebow could’ve given Harvey enough reasons to turn his pro football career around.

Unfortunately, it didn’t turn out that way.

Harvey could only muster four total tackles and two solo tackles in five games in the Mile High City.

Worse, he failed to record a single sack as a member of the Broncos.

To nobody’s surprise, the Broncos – who lost to the New England Patriots in the Divisional Round – didn’t renew Harvey’s contract.

Sadly, twenty-five-year-old Derrick Harvey rode off into the sunset never realizing his full potential on the NFL gridiron.

Not much has been known about Derrick Harvey since he played in his last NFL down during the 2011 season.

As of this writing, he doesn’t have any active social media accounts.

The Life And Career Of Luke Joeckel (Story)

The Life And Career Of Jimmy Smith (Complete Story)

The Life And Career Of Tony Boselli (Complete Story)

The Life And Career Of Maurice Jones-Drew (Complete Story)

The Life And Career Of Fred Taylor (Complete Story)