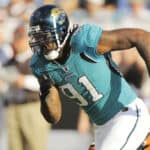 Eight sacks in forty-seven career games. Those are the words that aptly describe Derrick Harvey's disappointing NFL career. Harvey, a highly-touted 6'5", 268-lb. defensive end who won Defensive MVP National Championship Game honors with the Florida Gators in 2007, just couldn't get over the hump in the pro ranks. The Jacksonville Jaguars took a chance on him … END_OF_DOCUMENT_TOKEN_TO_BE_REPLACED

Who's the best player in Jacksonville Jaguars franchise history? Chances are the first name that comes to mind is Fred Taylor. Taylor, who has missed several chances to make it into the Pro Football Hall of Fame in recent years, should get a bust in Canton someday. We're talking about a versatile running back who established forty-two Jaguars franchise … END_OF_DOCUMENT_TOKEN_TO_BE_REPLACED 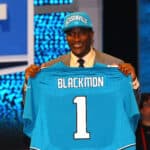 There are many NFL players who had remarkable potential but faded into obscurity and oblivion in the pro ranks. Think Ryan Leaf, JaMarcus Russell, Johnny Manziel, and Josh Gordon. Perhaps it’s time to include former Jacksonville Jaguars wideout Justin Blackmon in that not-so-elite group. Blackmon picked passing defenses apart during his heyday at Oklahoma … END_OF_DOCUMENT_TOKEN_TO_BE_REPLACED