Mention the nickname “Mr. Falcon” to any die-hard Atlanta Falcons fan, the first name that comes to mind is Tommy Nobis.

Nobis, an Outland Trophy and Maxwell Award winner during his college days with the Texas Longhorns,  was the first-ever draft selection in Falcons franchise history.

He wreaked havoc on defense as a five-time Pro Bowl linebacker for bad Falcons teams during his eleven-year tenure in Atlanta.

Worse, he struggled with the devastating effects of chronic traumatic encephalopathy in his later years.

He was a stickler for discipline dating back to his high school days.

Nobis woke up at 5:30 a.m., rode two different buses, and walked to his school on weekdays even though another school was only a few blocks from his house, per Sports Illustrated’s Dan Jenkins.

Nobis told Jenkins that Thomas Jefferson High School stood out because it had the best football program in the San Antonio area.

It was evident Tommy Nobis’ world revolved around football during his formative years in the Lone Star State.

“See, football is my life,” Nobis told Jenkins in the fall of 1965, his junior year with the Texas Longhorns. “I study and go to classes so I can play football. Football is my work, what I want to be.”

Nobis became known as a ferocious linebacker during his college and pro football careers.

However, he started out as a tight end with the Mustangs during his high school days.

When Nobis visited the Oklahoma campus, he heard several upperclassmen badmouthing the University of Texas.

Their conversation irked Nobis, who felt his Texas pride prevail at that moment. He decided he wanted to become a Texas Longhorn right then and there.

Tommy Nobis not only led the Longhorns to their first national title as a true freshman in 1963, but he also became one of the best defensive players in college football during his era.

College Days With The Texas Longhorns 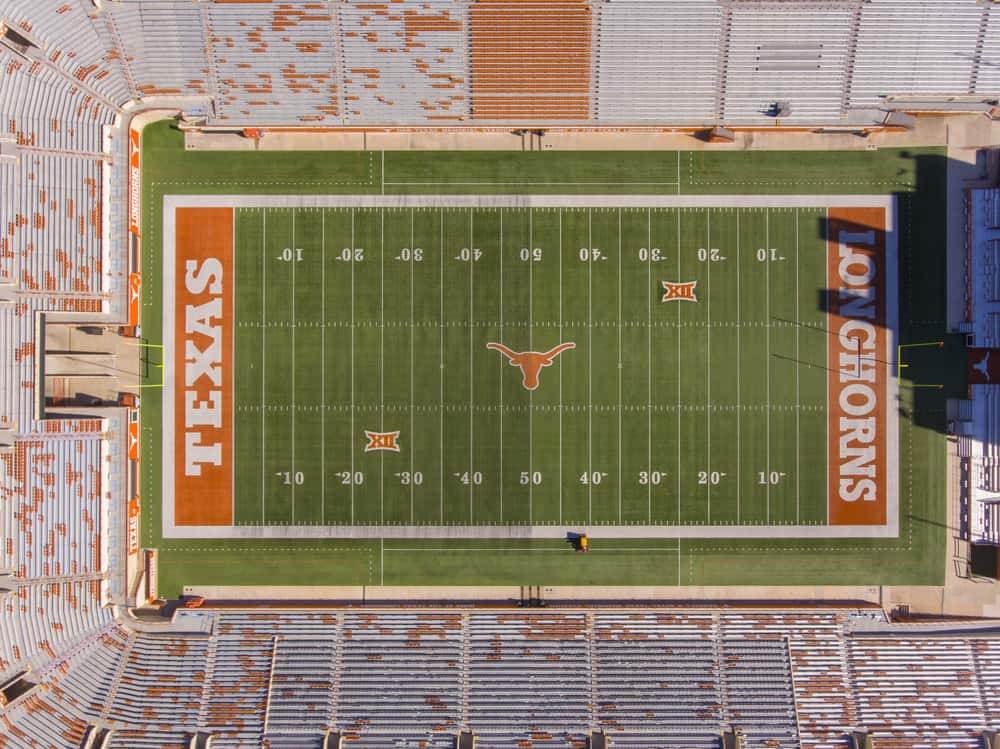 Nobis played on both sides of the ball during the Longhorns’ undefeated 11-0 championship season in 1963.

Nobis was an all-conference guard and linebacker during his sophomore campaign.

Thanks in large part to Nobis’ stellar defense, the Longhorns prevailed in lopsided fashion, 28-6.

Nobis continued hounding the best quarterbacks in the college football ranks during his three-year stay in Austin.

The Longhorns won ten of eleven games in Nobis’ sophomore season in 1964.

He led a defense that stymied Joe Namath’s Alabama Crimson Tide in the 1964 Orange Bowl.

According to Jenkins, Nobis once skipped a mid-semester vacation so he could prepare for spring training.

“Tommy is one of those people who is really sort of unhappy unless he’s tackling somebody,” Longhorns quarterback and Nobis’ roommate Marvin Kristynik told Sports Illustrated in the fall of 1965.

Nobis piled up on the accolades during his junior campaign in Austin, TX.

The DC Touchdown Club also handed the Knute Rockne Memorial Trophy to Nobis, proclaiming him the best collegiate lineman of the year.

Nobis admitted to Sports Illustrated during his junior year in 1965 he wasn’t any fun to be around after games so he didn’t date after the final whistle.

Nobis hung out with his family after games instead. They’d have dinner and then he’d listen to some country music before going to bed.

However, Nobis would get roused from his sleep when he heard football scores on the radio. That fired him up again to no end.

Although Tommy Nobis was known for his ferocity on the college gridiron, he already had the makings of a great public speaker.

Nobis’ Longhorns teammates witnessed him during a public speaking engagement at a downtown Austin, TX civic group in the spring of 1965.

Nobis’ teammates were impressed with what they saw. He eventually earned a reputation as a public speaker many years after he retired from football in 1976.

Tommy Nobis, arguably the best defender in college football in the mid-1960s, became one of the pillars of bad Atlanta Falcons teams during his 11-year National League Football career.

The expansion Atlanta Falcons made Tommy Nobis the first overall selection of the 1966 NFL Draft.

With Nobis’ selection, he earned the distinction of being the first player drafted in Atlanta Falcons franchise history.

Nobis eventually chose to play for the Falcons – the team he spent his entire 11-year NFL career with.

He promptly picked up where he left off with the Texas Longhorns.

Nobis had a franchise single-season record of 296 combined tackles in the 1966 NFL campaign.

Nobis continued playing at a high level in the next few years.

Unfortunately, the Atlanta Falcons lived up to low expectations: the expansion franchise won just three games in its debut season.

He led the Falcons in tackles an amazing nine times in eleven seasons.

Nobis’ NFL career ended on a sour note when he retired following the 1976 NFL campaign.

The team hired an inexperienced interim coach named Pat Peppler to replace him.

Atlanta finished with a dismal 4-10 win-loss record in 1976 and missed the postseason for the eleventh straight year.

The coaching change during that forgettable campaign left a sour taste in Nobis’ mouth.

“We went to bat for those last nine games with an unloaded gun,” an irate Nobis told The Associated Press (via ESPN) in 1998. “It was a really disastrous time.”

He thrived in an era when statistics for tackles and sacks were still non-existent.

Had that not been the case, he would’ve given today’s defensive players serious competition in those two statistical categories.

The man nicknamed “Mr. Falcon” also earned a stellar reputation during his time in Atlanta.

For his part, legendary Miami Dolphins running back Larry Csonka once said, “I’d rather play against Dick Butkus than Nobis.”

Current Falcons president and CEO Rich McKay told FullPressRadio.com (via SI.com’s Clark Judge) on May 24, 2021, he got to know Nobis when he became the team’s general manager in 2003.

He knew all about Nobis’ statistics and reputation among his Falcons teammates back in the day.

They told McKay that Nobis still went all out on the gridiron even when Atlanta experienced serious growing pains in the 1960s and 1970s.

Nobis’ gung-ho attitude on the football field eventually earned him a long-time admirer in McKay.

Tommy Nobis and his wife Lynn have two sons, Tommy and Kevin, and a daughter, Devon. They also have eight grandchildren.

Nobis and his family remained in the Atlanta area after he retired from the National Football League in 1976.

He became a member of the Texas Longhorn Men’s Hall of Honor that same year.

The Tommy Nobis Center was established a year after the Falcons linebacker retired from the National Football League in 1976.

The said non-profit organization aims to educate, train, and provide jobs to people with disabilities. It is located in a 52,000-square-foot facility in Marietta, GA.

Football never left Nobis after he hung up his cleats.

He worked in the Falcons front office for the next three decades. He served in various capacities including marketing, scouting, player development, and corporate development.

His daughter Devon Jackoniski told The Associated Press in 2019 he would always watch football games year-round even during the offseason.

She also said she and her family always watched all of the Falcons’ games at the stadium whether they wanted to or not.

He then became an inaugural member of the Atlanta Falcons Ring of Honor three years later.

The Texas Longhorns retired Nobis’ No. 60 jersey at halftime against the Arkansas Razorbacks on September 27, 2008.

Nobis is also a member of the NFL 1960s All-Decade Team.

Mr. Falcon Tommy Nobis was one of the toughest guys who ever played – An All-American at Texas, No. 1 pick in the 1966 #NFL draft, the best player on a decade’s worth of lousy Falcons teams. Nobis died at 74 in December 2017 of one of the most severe cases of CTE ever. pic.twitter.com/B9Wwgidb1G

Nobis was diagnosed with severe chronic traumatic encephalopathy (CTE) two years after he died on December 13, 2017.

It turned out Nobis already manifested symptoms of CTE during his playing days with the Atlanta Falcons.

Jackoniski remembered her mother called Nobis’ secretary to let her know what his mood was before he left for training camp every year.

“We were pretty uneasy growing up,” Jackoniski told The Associated Press (via ESPN) in January 2019. “Although my dad had just some beautiful moments of being a wonderful man, emotionally he was so unstable it was just so hard to get close to him.”

She also recalled people would call her dad “a saint” whenever they went out. In fact, he made it a habit to reach out to children with disabilities in restaurants and make them laugh.

Jackoniski and her other family members just smiled knowing their father’s mood would take a turn for the worse when they got home.

Nobis was a disciplinarian whenever he was around his children.

Jackoniski described her father as a humble man who wasn’t very outgoing. However, he was an outstanding public speaker and a known prankster.

Tommy Nobis was infuriated when his son Tommy informed him he didn’t want to play football anymore.

Consequently, a gap developed between father and son.

Nobis eventually developed a rift between himself and his children and grandchildren for two years because of his aggressive behavior.

Nobis displayed more symptoms of CTE in the ensuing years.

For instance, he berated a photographer for being overly intrusive moments before he was about to walk his daughter down the aisle, per The Atlanta Journal-Constitution’s Steve Hummer.

He uncharacteristically garbled his words during a eulogy he gave for his father-in-law in 2010.

After Nobis gave the eulogy, he directed his rage toward his two-year-old grandson.

The episode was so scary, Nobis’ family thought about calling the police.

“He was this caged animal that was unleashed,” Jackoniski told The Associated Press (via ESPN) nine years later. “At that point we knew there was something wrong.”

“I lived a life of anger toward my dad. My brothers, too,” Jackoniski told Hummer in 2019.

It also became increasingly difficult for Nobis to maintain his composure whenever he was out in public.

Nobis couldn’t show up at restaurants where he previously caused a commotion. He even got out of his car and scolded a drive-through bank teller once because she took too long to accommodate the previous customer.

Jackoniski, who currently works as an orthopedic assistant, wrote a first-person essay on NBCNews.com in February 2019 chronicling her father’s struggles with his memory as he grew older.

She wrote Nobis had a hard time remembering where he attended church, his address, and what food he ate most recently.

Jackoniski and her family members often saw Nobis staring at the television or into space while he was sitting on his favorite chair.

She also couldn’t figure out why her father loved raking the leaves and sweeping in their yard.

Jackoniski concluded those were mindless activities her father could tolerate during his struggles with CTE.

Despite Nobis’ struggles with CTE late in life, he remains one of the cornerstones of Atlanta Falcons franchise history.

Nobis was a pillar of strength on those early Falcons teams that struggled mightily year in and year out.

On that note, one accolade that has eluded him all these years is enshrinement in the Pro Football Hall of Fame.

“‘Mr. Falcon’ is not in the Hall of Fame,” Falcons CEO and president Rich McKay told FullPressRadio.com (via SI.com’s Clark Judge) in May 2021. “It does not make me happy.”

McKay made a strong case for Nobis’ Pro Football Hall of Fame candidacy in a first-person letter he addressed to voters and fans on the Falcons’ official team website in January 2020.

Someday, hopefully Mr. Falcon will earn his rightful place with other gridiron greats in Canton, OH. 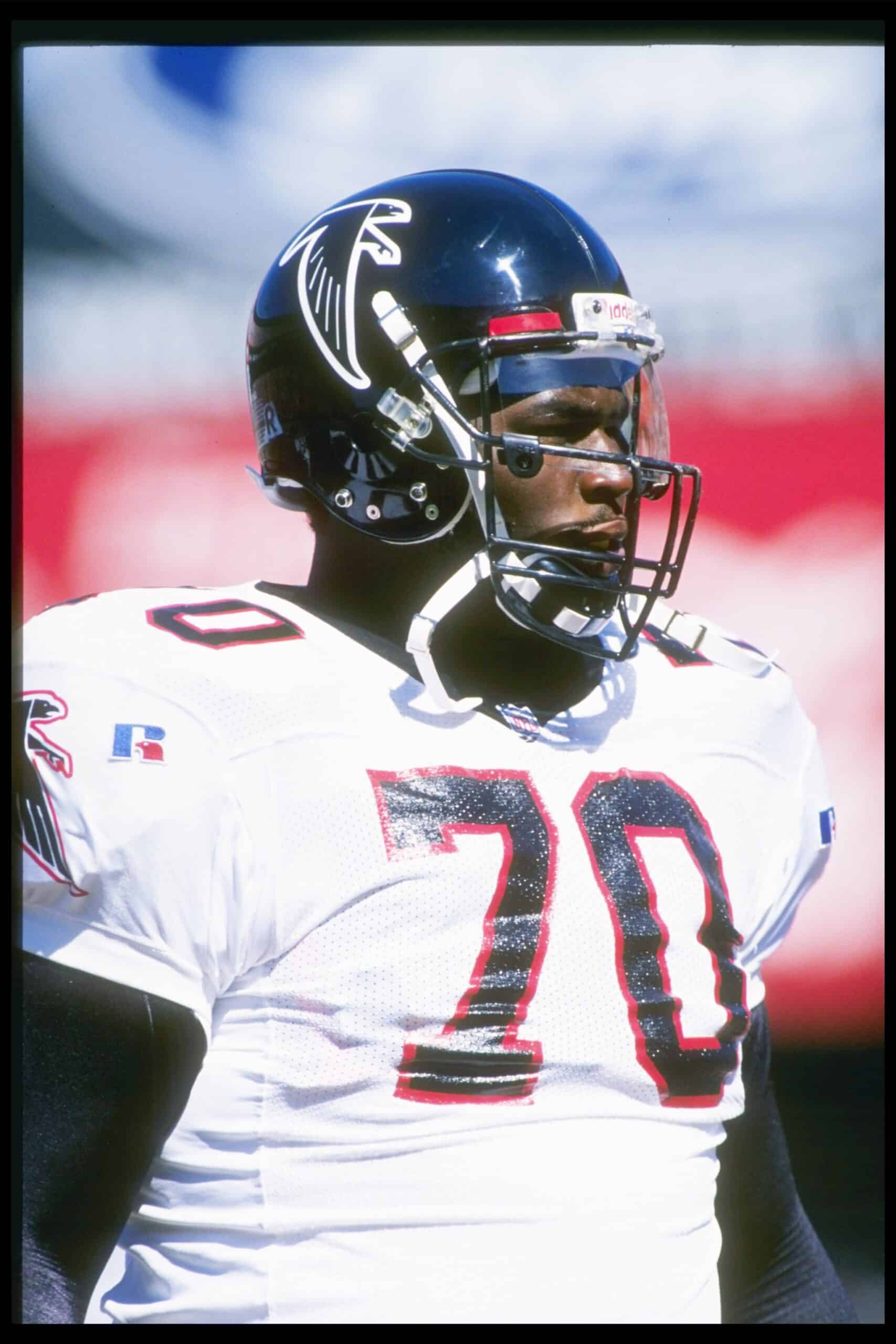 The Life And Career Of Bob Whitfield (Story) 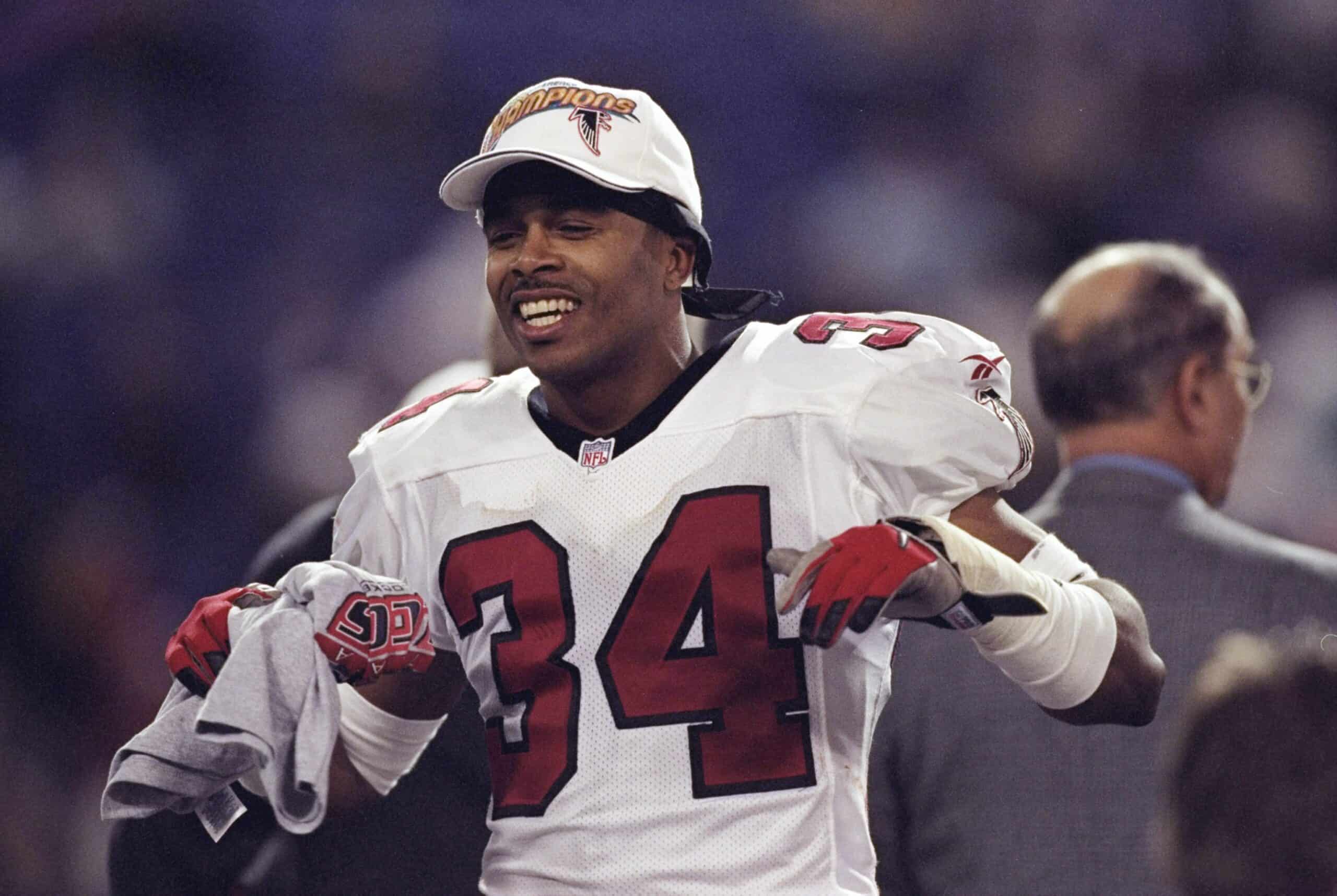 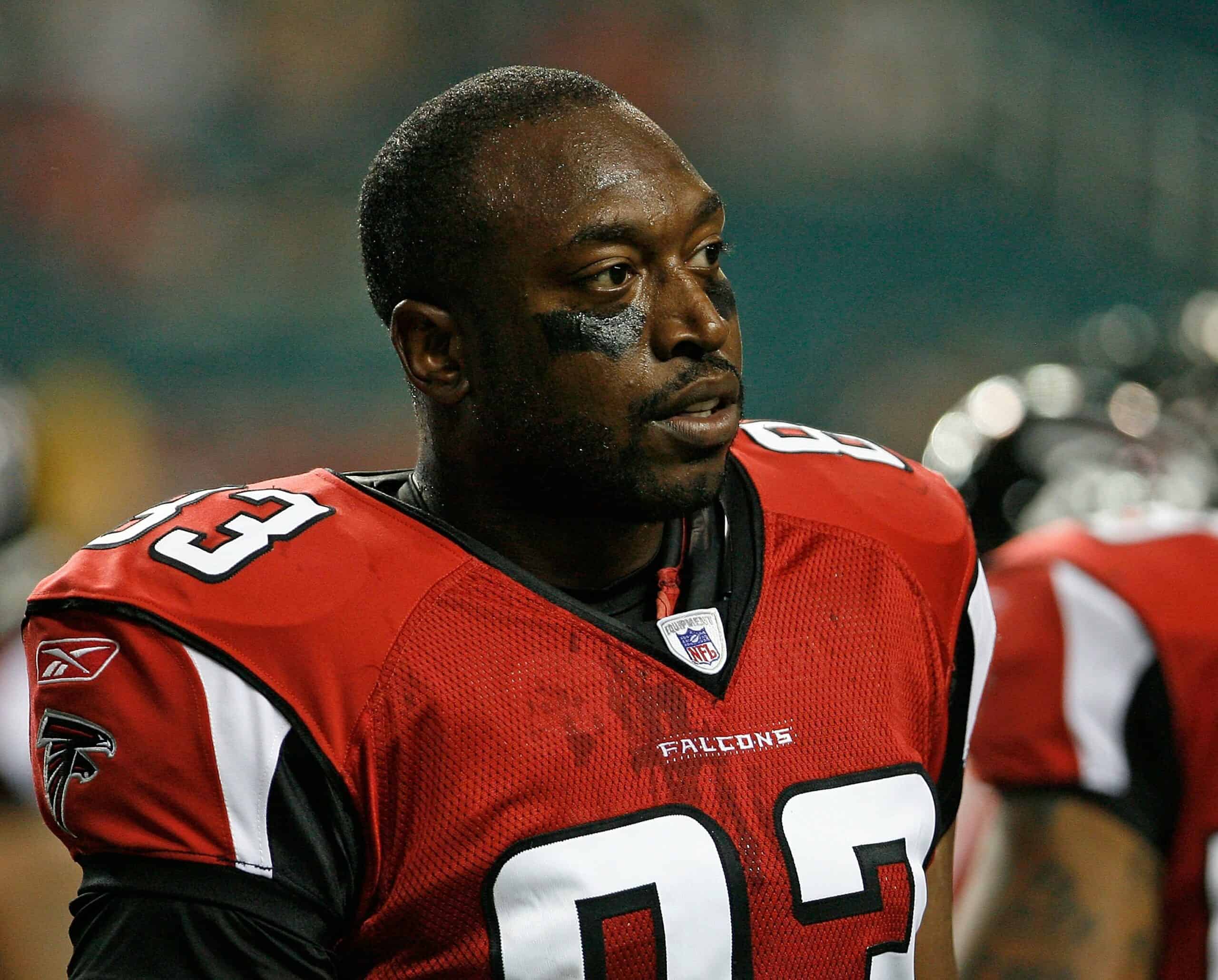 What Happened To Alge Crumpler? (Story)

The Life And Career Of Tommy Nobis (Story)