Numerous rules have been implemented to prevent play that may result in serious injury and loss of games.

For most of the NFL’s history, players were ruthless and did anything it took to get a competitive advantage.

For old-school defenders, making a tackle didn’t just entail bringing a ball carrier to the ground.

It actually meant slamming an opponent to the turf and burying him six feet under so he never carried the ball again.

The man they called “Tombstone” regularly harassed quarterbacks and made life miserable for anyone who dared to enter his zip code.

Jackson’s ultimate desire when playing football was to be the “end of the road” for opponents.

This is the story of Rich “Tombstone” Jackson.

Happy birthday to Rich "Tombstone" Jackson. I never got to watch you play, but you left your fingerprints all over this franchise. 🥳🥳🥳 pic.twitter.com/oQWwxWGWlb

Jackson was a natural competitor, and his dedication to being the best was on full display in high school.

While a member of the football team at Landry High School in the Algiers neighborhood in New Orleans, Jackson challenged a classmate to a 100-yard sprint.

The classmate was already an experienced sprinter and beat Jackson handily.

After crossing the finish line, the classmate taunted Jackson about being too big to keep up.

That challenge just made Jackson work and train harder than he ever had before.

Whenever he could, Jackson spent the next year slaving over his sprinting technique and getting faster.

Eventually, he challenged the classmate to a rematch, and this time, Jackson beat the sprinter.

That feat got him a spot on the relay squad of Landry’s track team.

He could also be found competing in the throwing events.

Despite his skills in track and field, Jackson was a natural at football.

His newly acquired speed, coupled with his 6’3”, 210-pound frame, made Jackson a very effective defensive end for the Bucs.

During his time with the football team, Landry High won a district championship.

As Jackson wrapped his prep career, he already knew where he wanted to attend college.

When he was in high school, some of Jackson’s football coaches would take their players to Southern Univerity football games in nearby Baton Rouge.

A number of the coaches were alumni of the school and wanted to show their charges what was possible, especially at a Historically Black College.

“On the weekend, after we would play our football games, they would take us up to Southern University,” Jackson said. “We kind of fell in love with Southern.”

Without much prompting, he accepted a scholarship to play for the school.

Jackson’s ability on the gridiron was evident soon after he participated in his first college practice.

The team named him a starter as a freshman and he played outside linebacker as well.

The Southern coaches also moved Jackson around the field to utilize his size. They played him at receiver, tight end, and split end.

Jackson continued to compete in track and field and did well in the throwing events.

He was a three-time conference champ in the shot put and won the conference title four times in the discus.

As of 2019, Jackson still holds the state record for the shot put.

During his time at Southern, Jackson and his teammates saw firsthand the effects of racism in the South.

Growing up in the 1960s meant that athletes like Jackson were susceptible to the heated backlash of the Civil Rights movement.

However, attending an HBCU gave Jackson the preparation he needed as a young man.

“It taught us how to navigate through society, make decisions, how to prepare yourself for the long haul,” Jackson said.

Jackson was a good player for Southern, but he wasn’t widely known except to NFL scouts assigned to the area.

It didn’t help that the Jaguars’ record wasn’t very good during Jackson’s time at the school.

The best the team could muster was seven wins in 1963.

He was not selected in the 1966 NFL Draft, but the Oakland Raiders scooped him up as a free agent and tried him as an outside linebacker that year.

Jackson saw action in five games but did not make any significant contributions.

When the season concluded, Jackson was included in a trade package that sent him to the Denver Broncos in exchange for Lionel Taylor, a former American Football League All-Pro, among others.

“We need offensive linemen and linebackers with some experience,” head coach Lou Saban said at the time.

Jackson Becomes a Terror With Denver 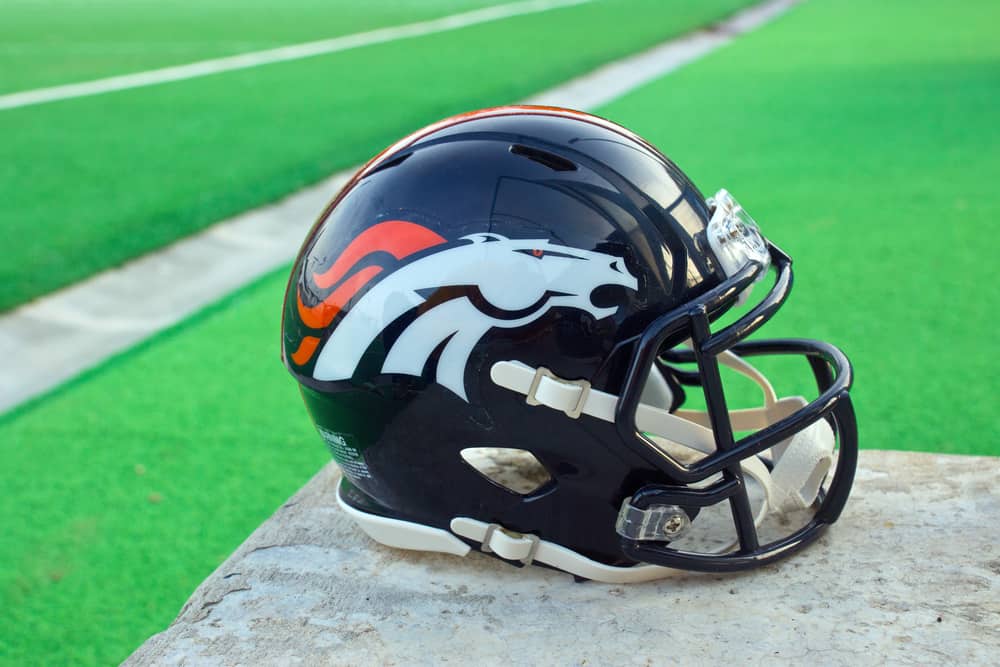 In his first training camp with the Broncos, new head coach Lou Saban moved Jackson from linebacker to defensive end.

To Saban, putting someone who was 6’3” and close to 260 pounds with sprinter’s speed at end just made good sense.

So much awesome in this pic of Rich ‘Tombstone’ Jackson. #Broncoscountry pic.twitter.com/uTu6ZBzd9k

His move would prove prophetic as Jackson started every game and found himself in the backfield on a consistent basis.

Recently, a group of researchers went through decades of pre-1982 NFL games and recorded every sack.

Jackson was credited with 4.5 sacks in 1967, and he also recorded a safety.

The following year, he tallied 10.5 sacks and received a first-team All-Pro nod along with his first Pro Bowl vote.

“I would punish you,” said Jackson in 2014. “And if you had to play us twice, the next time around, you’re leery, because I knew on film day, you were going to be the focus of attention. The coach was going to keep running the thing back and forth—‘Look at Jackson beating you up!’ “

Although Denver would only win five games that year, they shocked the league during a Week 6 game against the New York Jets.

Happy Birthday to one of the most feared players in @Broncos history, Rich ‘Tombstone’ Jackson! #BroncosCountry pic.twitter.com/sBpwcc1pXm

New York was a good team quarterbacked by Joe Namath and would eventually win Super Bowl III after the season.

Playing against a lowly Broncos team didn’t register with Namath and his mates that day.

By the end of the game, Jackson had made his presence felt by making seven tackles, countless quarterback pressures, and knocking down five passes.

Due in part to Jackson’s presence, Denver won the game 21-13.

The Jets would only lose one more game that season.

Jackson was nicknamed “Tombstone,” and years later, he explained why.

“People want to know why they call me Tombstone. That’s the termination of life, a symbol of death, the end of the road,” Tombstone told the Denver Post in 2014.

For opponents who navigated their way through Jackson’s area, it truly was the end of the road.

During a Week 2 contest, the Jets came to town looking for a little revenge for the previous year’s upset.

That wouldn’t happen as Jackson harassed and sacked Namath twice as Denver won the contest 21-19.

A Tombstone on Broadway

New York tried multiple blockers against Jackson with no luck.

“That Jackson was too much for us. He is a great end,” said Jets head coach Weeb Ewbank after the game.

Without a doubt, Jackson was ruthless while rushing the quarterback.

He utilized the now outlawed head slap which he called a “halo spinner.”

Happy 81st Birthday, no. 8⃣7⃣ Rich "Tombstone" Jackson! Tombstone terrorized opponents as a Denver Bronco DE from 1967–1972 (3× 1st-team All-Pro). He is infamous for his patented pass rush moves, particularly the head slap! Jackson is an inaugural member of the team's ROF. pic.twitter.com/0Grx4pdZ0L

It was an effective move that rang the bell of more than a few opposing linemen.

“After a whole game of that (head slap), I’d have a heck of a headache. And where your head goes, your body goes,” said former Oakland lineman Harry Schuh.

During a game against the Green Bay Packers, Jackson’s head slap cracked the helmet of an opposing lineman.

“My style of play is more or less the style of my own. It’s more or less an aggressive style. I just like to hit people, and I like to go hard. I try to keep myself in superior condition in that it would allow me to go hard on every play,” Jackson stated at the time.

In 1971, Tombstone was on his way to another great year when he had 3.5 sacks by the midway point of the season.

However, during a game against the Philadelphia Eagles, Jackson sustained a serious knee injury that caused him to miss the remainder of the year.

He returned to the Broncos in 1972, but it was obvious that Tombstone’s speed was absent due to his knee.

After four games and two sacks with Denver, the organization traded him to the Cleveland Browns.

Tombstone would help his new team defeat his former squad 27-20.

Jackson would play the final 10 games of the ‘72 season with the Browns and add two more sacks.

When the season ended, the Browns faced the Miami Dolphins in the Divisional round.

It was the first playoff game of Jackson’s career.

Then, after only seven years as a pro, Jackson retired due to complications from his knee injury.

In his short career, Tombstone had two fumble recoveries, one safety, and 45 unofficial sacks (the NFL did not keep track of tackles at the time).

He was a three-time first-team All-Pro and was also selected to the Pro Bowl three times.

Jackson has since been added to the Broncos Ring of Fame.

With his pro football career behind him, it was on to the next phase of Jackson’s life.

He retired as “Tombstone” and “Mr. Jackson” returned to New Orleans where he spent the next several decades as a school teacher and administrator.

He also worked for a time at a city Recreation Department.

Jackson was honored by several organizations beginning in the mid-1970s.

The Black College Football Hall of Fame inducted him into its ranks in 2019.

Tonight, the Black College Football Hall of Fame Class of 2019 gather with friends and family before tomorrow’s induction. On stage, @Bighugh53 (L) and Frank Lewis (R) listen to Rich “Tombstone” Jackson talk about how he got his nickname! pic.twitter.com/nmTEB2BiSy

Upon receiving the recognition, Jackson was overcome with gratitude.

“I didn’t really think I deserved to be there,” Jackson said. “There were so many giants and people who helped make the football league what it is today. I guess if you matched some of the names of the players who went into this HBCU football hall of fame, they would rival any other hall of fame that’s in existence.”

Although he only played seven years, Jackson’s 45 career sacks and ability to effect an offense have made some voters push for Tombstone’s inclusion in the Pro Football Hall of Fame.

One writer, the late Paul Zimmerman, staunchly believed that Jackson deserved to be in the Hall.

“In his prime,” Zimmerman wrote, “he was the very best run-pass defensive end the game has seen.”

Jackson is currently 81 years old and lives with his wife, Katherine, in the New Orleans area.

The Life And Career Of Karl Mecklenburg (Story)

The Life And Career Of Olandis Gary (Story)

What Happened To Lyle Alzado? (Story)

What Happened To Demaryius Thomas? (Story)

The Life And Career Of David Treadwell (Story)

The Life And Career Of Alphonso Smith (Story)

The Life And Career Of Ed McCaffrey (Complete Story)

The Life And Career Of Shannon Sharpe (Story)

The Life And Career Of Terrell Davis (Complete Story)

The Life And Career Of Rich "Tombstone" Jackson (Story)