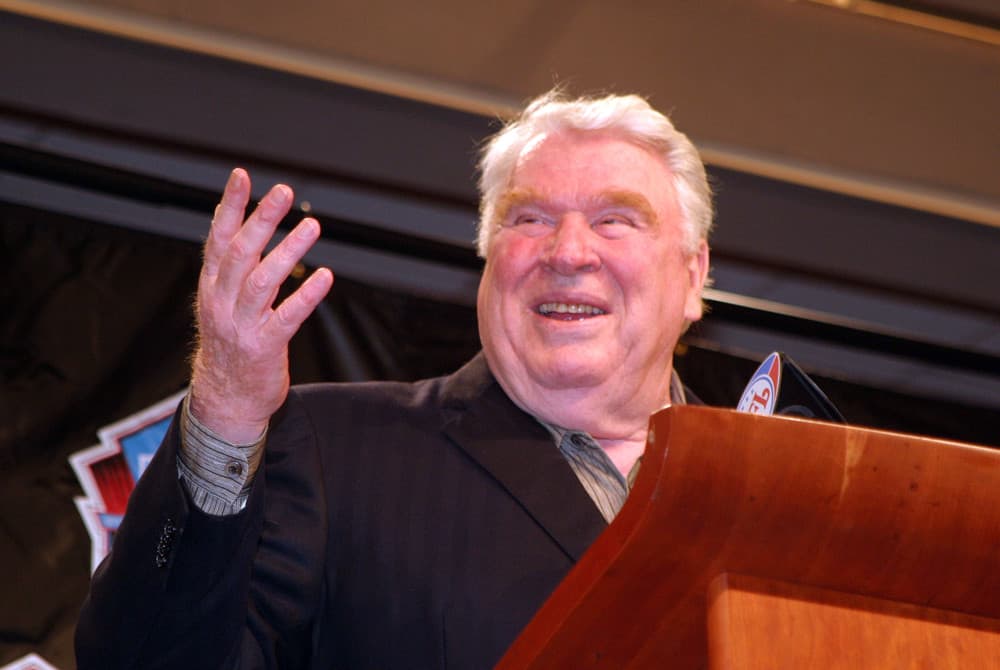 Sports broadcasters come in all shapes, sizes, and talent.

The truly special ones become the soundtrack of not only our favorite teams but our very lives.

Football itself has had its share of memorable announcers at both the college and pro levels.

Perhaps the most beloved NFL broadcaster of the modern game was John Madden.

Madden was a former football player and coach who left the sidelines for the broadcast booth at the peak of his coaching career.

For the next several decades, he would fill the air waves with a hearty mix of knowledge and hilarious quips.

As difficult as it is, Madden excelled as a storyteller and analyst and would later be recognized for his contribution to the sport with his inclusion into the Pro Football Hall of Fame.

This is the story of John Madden.

Growing up in the Bay Area

His parents moved the family to Daly City, California while John was still young.

After attending Catholic parochial school, Madden was a student at Jefferson High School in Daly City.

While at Jefferson, Madden was a three-sport star in football, basketball, and baseball.

His athleticism was most evident on the gridiron, where his size and agility confounded opponents.

By the time he graduated high school, Madden was a highly regarded lineman.

He was recruited to play for the University of Oregon but attended the College of San Mateo in 1954.

A knee injury caused Madden to redshirt his first season at San Mateo.

He played for the Bulldogs in 1955, then transferred to Grays Harbor College in Aberdeen, Washington in 1956.

Madden then returned to California in 1957 where he played on both sides of the ball for Cal Poly, San Luis Obispo.

While at Cal Poly, Madden was named All-Conference as an offensive tackle.  He also found time to play catcher for the school’s baseball team.

He was drafted by the Eagles with the 244th overall pick of the 21st round in the 1958 NFL Draft.

The injury was significant enough that he had to give up his dream of being a pro football player.

Not to be deterred, Madden switched gears and went into coaching.

The move would prove to be a perfect fit as Madden had a bachelor’s and master’s degrees in teaching.

“I got hurt in my rookie year with the Philadelphia Eagles – a knee injury – and I couldn’t play. While I was rehabbing, Norm Van Brocklin would be watching films and would explain what was happening. I ended up with a degree in teaching and my love for football meshed with teaching,” Madden said in 1995.

After leaving the Eagles, Madden became a coaching assistant at Allan Hancock College in Santa Maria, California in 1960.

Two years later, he became the head coach for Hancock.

Before he was a legend in the NFL and in the broadcasting booth, John Madden was the coach of Allan Hancock College in Santa Maria, California (1960-1963).

The Bulldogs won three league titles in Madden's four seasons before he went to San Diego State as a defensive coordinator. pic.twitter.com/PHne7xPBuy

After the 1963 college season, Madden was hired as a defensive assistant at San Diego State.

It was at San Diego State where Madden coached under Don Coryell, who was a pioneer of the modern passing game.

In Madden’s final season with the Aztecs in 1966, the program was ranked as one of the top small college teams in the country.

The following year, Madden made a move to the pro ranks after being hired by Oakland Raiders owner Al Davis as the team’s linebackers coach.

At the time, the Raiders were beginning their seventh season.  However, the organization was one of the best in the American Football League.

Oakland then hammered the Houston Oilers 40-7 in the AFL Championship before facing the Green Bay Packers in Super Bowl II.

During the title game, the Packers displayed their superiority with a resounding 33-14 victory.

However, their season ended after a close 27-23 loss in the AFL Championship game to the New York Jets.

Weeks after the ‘68 loss to the Jets, then head coach John Rauch resigned to become the head coach of the Buffalo Bills.

At 32 years old, Madden became the youngest head coach in the league.

For some, coaching a ragtag band of misfits might be daunting.

Two of the greatest in NFL history. Coach John Madden and QB Ken Stabler were a winning combination. The Oakland Raiders of the 197O’s were an exciting and dominating team… pic.twitter.com/jVWF6ZpKGv

Although he was loved by his players, Madden could put his charges in place when he needed to.

“We all loved John,” former Raiders linebacker Phil Villapiano says. “But when he did have to raise his voice — which wasn’t often — it had tremendous power. It shut you right up, and he always knew when to use that.”

The 1969 and 1970 Raiders went to the league championship game both years only to lose to the Chiefs and Colts respectively.

For the next five years, Oakland would continually exasperate their fans.

Dominating regular seasons would end in agony in the playoffs.

In 1972, the team suffered one of the worst endings to a game in league history.

Leading the Pittsburgh Steelers with only seconds remaining in the Divisional Playoffs, Pittsburgh’s Franco Harris caught a deflected ball and ran to paydirt.

The “Immaculate Reception” led to a shocking 13-7 Oakland loss.

John Madden: ' Immaculate Reception will 'bother me until the day I die' https://t.co/rKTsnfhAU0 pic.twitter.com/mJ3HlEUhWP

Two of those losses were at the hands of the hated Steelers.

Oakland only lost one game during the regular season, then dispatched the Patriots in the Divisional Round.

One week later, the Raiders got some long overdue revenge against Pittsburgh, dismantling their nemesis 24-7 in the AFC title game.

Oakland’s next opponent, the Minnesota Vikings, boasted one of the best defenses in the league.

However, Madden and the Raiders proved too much for the Purple People Eaters.

By halftime, the game was over, but Madden kept the gas pedal down and crushed the Vikings 32-14 in Super Bowl XI.

The high of winning the sport’s biggest game carried over into 1977.

Oakland went 11-3 and bested the Baltimore Colts 37-31 in two overtimes in the Divisional Round.

In the AFC title game, the Denver Broncos ended the Raiders hope of a second consecutive Super Bowl appearance by defeating Oakland 20-17.

The Raiders took a step back in 1978, finishing 9-7 and missing out on a playoff spot.

After the season, Madden decided to step down from his position.

Oakland was still a talented team, one that would win the Super Bowl again only two years later.

However, Madden was suffering from an ulcer and was burned out.

“He’d be up at 350 pounds sometimes by the end of the year, just pounding down Maalox for his stomach,” Villapiano says. “We loved him but we worried about him — a lot.”

He would leave the profession at 42 years old and with 103 victories.  The total was an accomplishment for Madden.

He had compiled his 103-32-7 overall mark in only 10 short years, making Madden the youngest coach to reach 100 career victories.

“I gave it everything I had,” Madden said at his retirement press conference. “I don’t have any more. It’s very difficult after 10 years to stand up and say that you’re retiring. I’m not resigning. I’m not quitting. I’m retiring from football coaching, and I’m never going to coach again.”

As of 2022, Madden still leads the Raiders with the most wins in franchise history.

Second Act as a Sportscaster 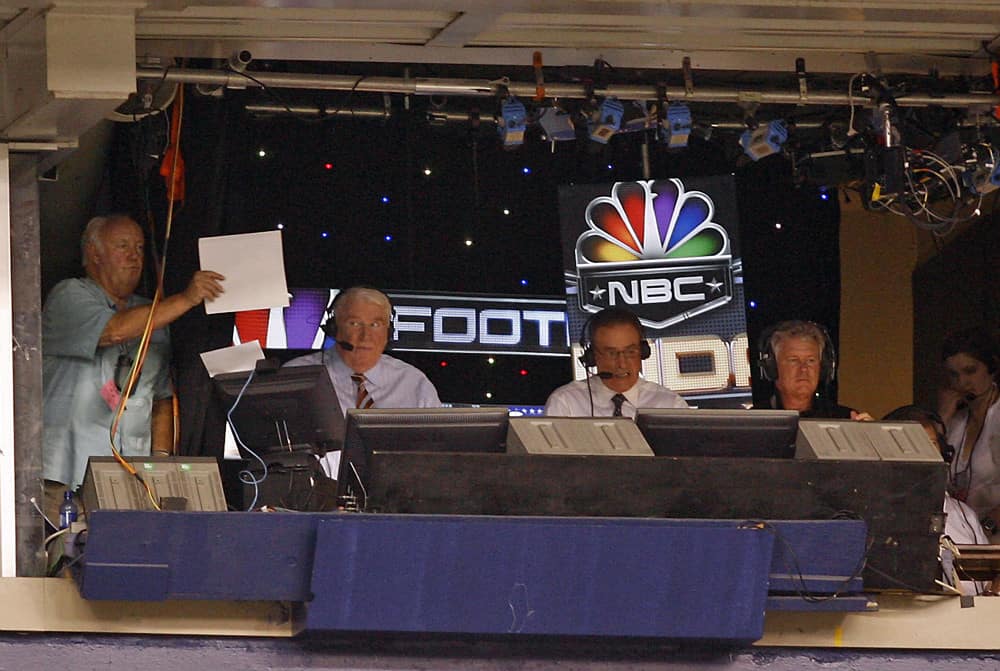 In 1979, he got into broadcasting and immediately took a liking to it.

His ability to explain strategy and game concepts melded well with his gifts as a teacher.

After serving a small role as a color commentator for CBS for a few years, Madden replaced Tom Brookshier in 1981.

He was paired with Pat Summerall as the network’s top broadcasting team.

For the next several years, the Madden/Summerall duo was perfect theatre.

Such sad news to hear about the passing of football legend John Madden. Madden and Pat Summerall were the best in the business when it came to NFL coverage. It was something special if they were calling the game for your team on Sunday. RIP Madden. pic.twitter.com/rt2xjGV2p6

During their time together, the two called eight Super Bowls.

In 1994, the duo were hired by Fox Sports and Madden reportedly made more money with his Fox contract than any player in the NFL.

Madden’s popularity was, in part, due to his use of a telestrator to diagram plays and explain to viewers what was happening.

He was also known for using descriptive words such as “Boom!” “Whap!” and “Bang!”

Also, due to claustrophobia and a fear of flying, Madden outfitted a giant bus named the “Madden Cruiser” and was driven to each game he called.

Madden enjoyed calling Thanksgiving Day games for CBS and Fox where he presented the winning team with a “turducken.”

Madden moved to ABC in 2002 and was paired with Al Michaels to call Monday Night Football games.  At that point, Madden was making $5 million per year.

In 2005, Madden was hired by NBC to broadcast their Sunday Night Football games.

He remained with NBC until calling his final game, Super Bowl XLIII between the Cardinals and Steelers on February 1, 2009.

At the time of his retirement, Madden had won 12 Emmy Awards for his broadcasting.

He was replaced in the booth by Cris Collinsworth.

While he was still broadcasting, Madden began his “All-Madden” team, which were players who he thought represented football and played the sport the way he thought it should be played.

Madden further explained his idea for the team in his book All Madden.

“What does it mean to be ‘All-Madden’? It’s a whole range of things. For defensive linemen and linebackers, it’s about Jack Youngblood playing with a busted leg, Lawrence Taylor wreaking havoc on the offense and Reggie White making the other guy wish he put a little more in the collection plate at church. It’s about a guy who’s got a dirty uniform, mud on his face and grass in the ear hole of his helmet.”

In 1998, Madden would begin lending his name to a video game line.

The Madden NFL brand of games exploded in popularity and continue to be a bestseller.

In 2006, Madden was inducted into the Pro Football Hall of Fame.

A quote on his Hall bio says everything one should know about Madden.

“Coaching isn’t work.  It’s more than a job.  It’s a way of life…no one should go into coaching unless he couldn’t live without it…football is what I am.  I didn’t go into it to make a living or because I enjoyed it.  There is much more to it than just enjoying it.  I am totally consumed by football, totally involved.  I’m not into gardening…or any other hobbies.  I don’t fish or hunt.  I’m in football.”

On Christmas Day, 2021, Fox Sports broadcasted a documentary about Madden titled All Madden.

The special showed clips of Madden’s life including his coaching and broadcasting days.

Former co-workers, players, and Madden’s sons and wife, Virginia, were all interviewed.

Madden was present to see the tribute and appreciated it immensely.

The following day, the Madden’s celebrated their 62nd wedding anniversary.

Then, on December 28, 2021, Madden passed away suddenly at his home in Pleasanton, California.  He was 85 years old.

After hearing of his passing, NFL Commissioner Roger Goodell praised Madden for his contributions to the game.

“Nobody loved football more than Coach. He was football. He was an incredible sounding board to me and so many others. There will never be another John Madden, and we will forever be indebted to him for all he did to make football and the NFL what it is today,” Goodell said. 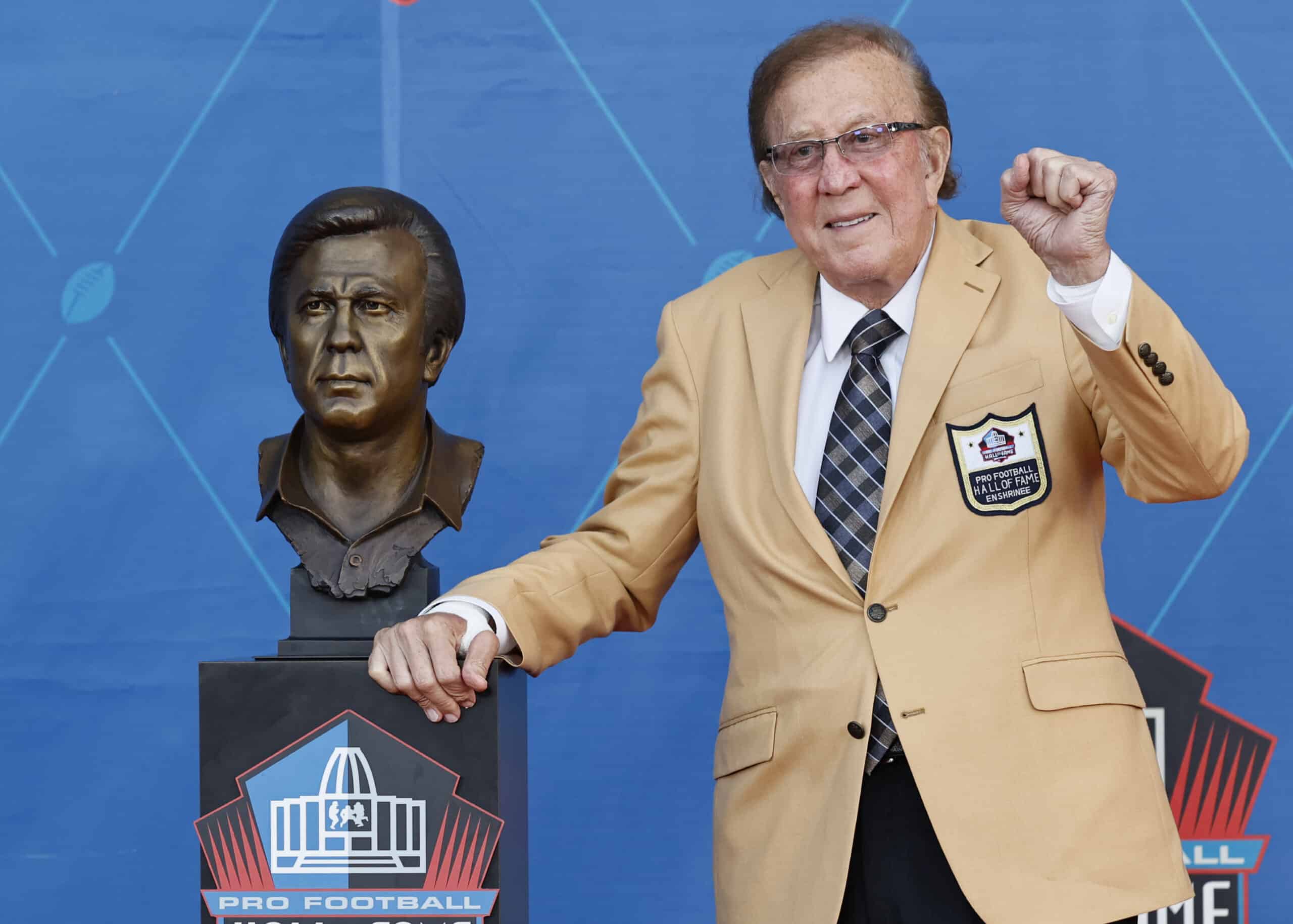 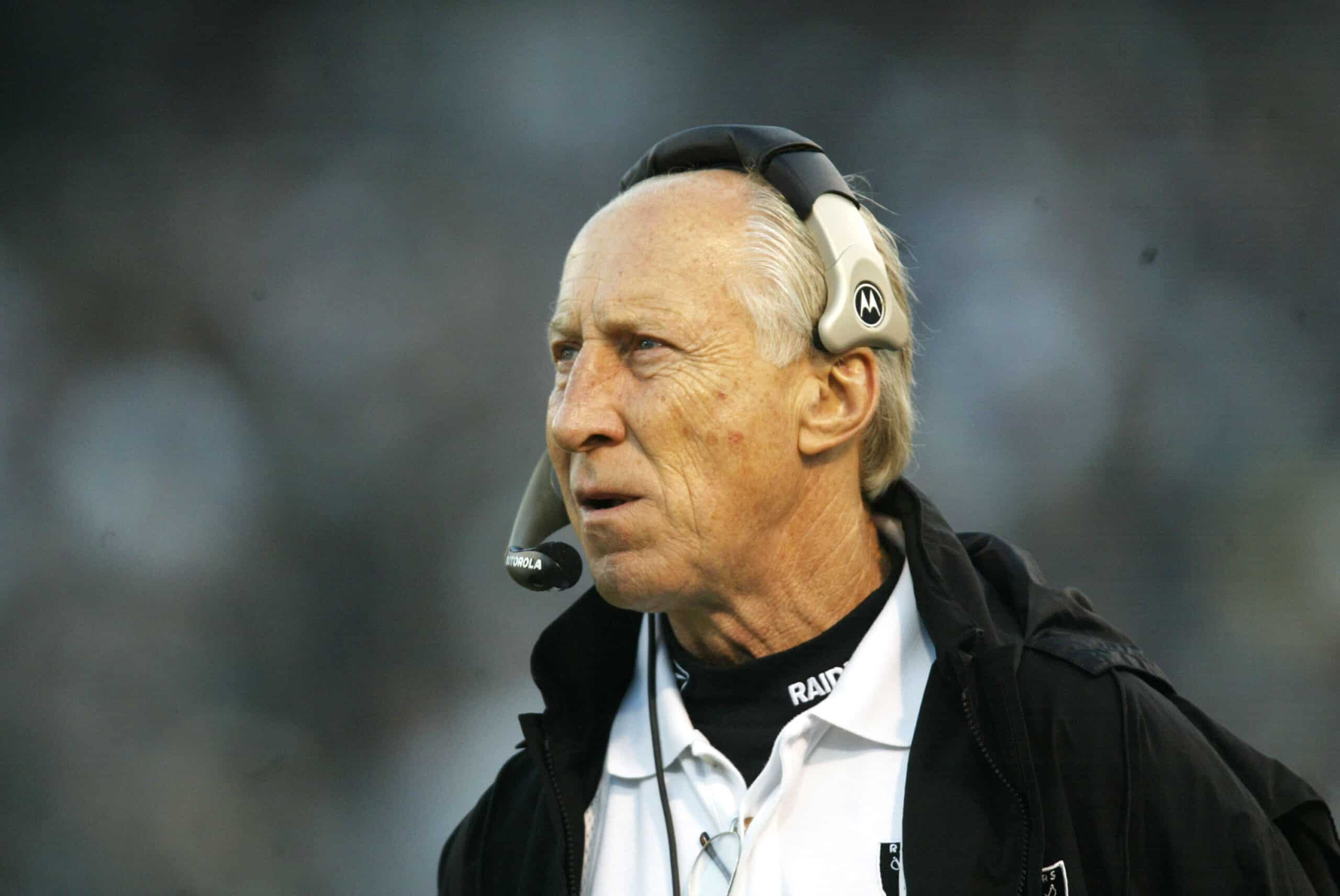 The Life And Career Of Fred Biletnikoff (Story) 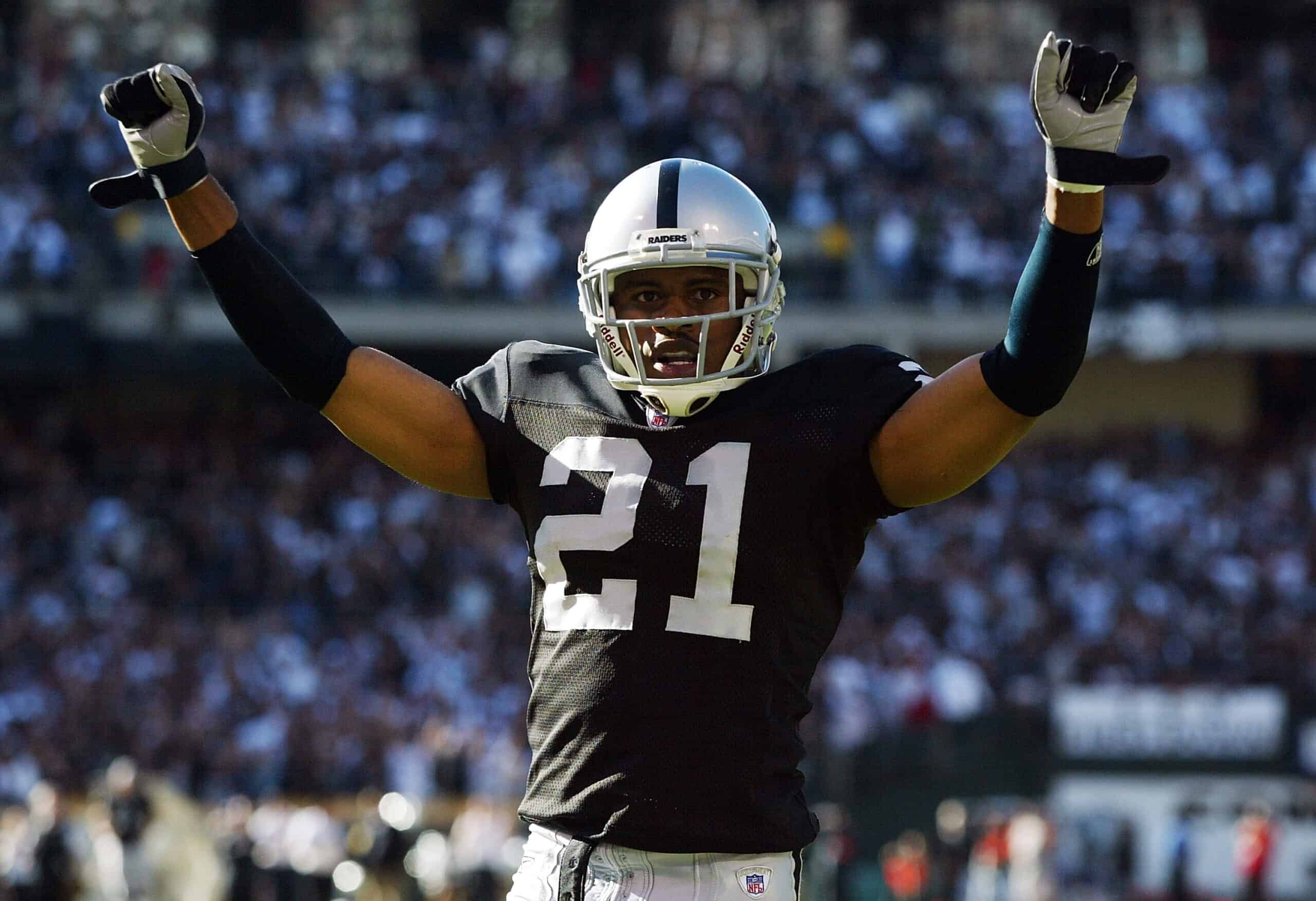 What Happened To Nnamdi Asomugha? (Story)