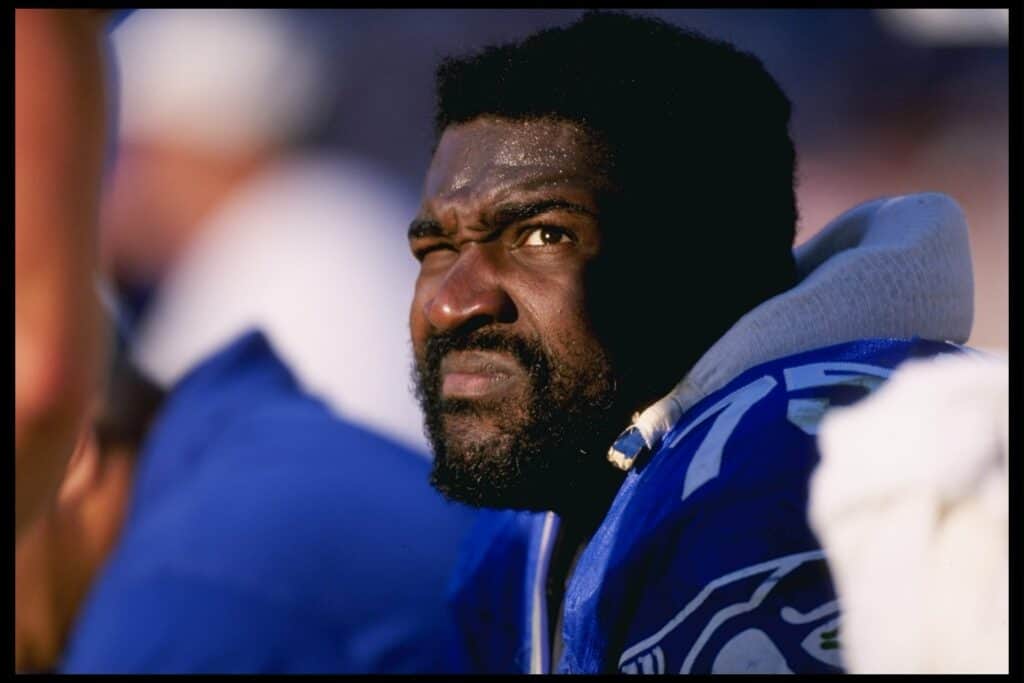 Howard Ballard, who stood 6’6″ and weighed 325 pounds, was an imposing figure on the Buffalo Bills’ offensive line for six seasons.

The gargantuan Ballard plowed through incoming pass rushers with ease. No wonder he earned the nickname “House” during his glory days in the National Football League.

Ballard was instrumental in protecting Pro Bowl quarterback Jim Kelly during the Bills’ rise to prominence in the 1990s.

Not bad for an unheralded 11th-round selection from the University of Alabama A&M.

Early Life And College Days With The Alabama A&M Bulldogs

Howard Louis Ballard was born in Ashland, AL on November 3, 1963.

He was an offensive lineman for the Clay County Panthers.

The unheralded big man would eventually rise to prominence and become one of the best offensive linemen in Buffalo Bills franchise history.

The Buffalo Bills made Howard Ballard the 283rd overall selection of the 1987 NFL Draft.

The Bills drafted Ballard in the eleventh round.

Ballard cracked the Bills’ starting lineup as a de facto rookie in 1988. He only signed with Buffalo that year despite getting drafted in 1987.

That duration covered a span of ninety-four straight games, including four consecutive Super Bowl appearances from 1990 to 1993.

Ballard took over the Bills’ starting right tackle spot in 1989, replacing Joe Devlin (who moved to the starting right guard position). He started eighty straight games from that point onward.

For their part, Ballard and the Miami Dolphins’ Richmond Webb were the trendsetters among offensive tackles who tipped the scales at 300 pounds or more.

One of the few Bills offensive linemen who had the advantage in size over Ballard was nose tackle Ted Washington.

According to the Bills’ official website, Washington wore a size 54 or 56 jersey during his playing days in Western New York from 1995 to 2000.

Thus, he owned the distinction of wearing the largest Bills jersey in franchise history.

The missed block allowed Hand to tackle Kelly, who suffered a separated shoulder and sat out the Bills’ next four games.

“It should never have happened,” Kelly told The Buffalo News‘ Milt Northtrop in October 1989. “He should have been blocked. Watching film, I don’t know what Howard was thinking.”

The “Bickering Bills” made headlines for the wrong reasons after Ballard’s botched block against the Colts.

Jim Kelly complaining publically about a Bills player? Mmm been there before – Howard Ballard.

Bills head coach Marv Levy told the media that Kelly apologized to Howard and his teammates.

Levy admitted Kelly’s remarks were unfortunate. However, Levy made it clear he didn’t harbor any grudge or resentment toward him.

He told The Buffalo News he loved Kelly and Ballard in equal measure.

On the other hand, Ballard made no comments on the matter. He wanted to put it behind him, per Northrop.

Ballard and Co. moved on from the infamous bickering incident to win a franchise-record thirteen games in the 1990 NFL campaign.

They also reached their first Super Bowl that year behind a sturdy offensive line that allowed just 27 sacks all season.

While Howard Ballard turned heads with his impressive play on the offensive line, his interview skills left much to be desired.

Staba remembered a post-game interview he did with Ballard after the Bills blanked the Cleveland Browns 42-0 at Municipal Stadium the year they went to their first Super Bowl.

With the Bills’ line of scrimmage on the 11-yard line, they resorted to a counter-trey play that had Ballard running up the middle with running back Thurman Thomas behind him.

The ploy intended to lure a Browns defender into a gap another Buffalo offensive lineman opened up.

Once the Cleveland defender fell for the ploy, Ballard would annihilate him.

When Gash scampered for the line of scrimmage, Ballard met him head on.

The next scene was like a freight train plowing into a car.

Staba thought Ballard didn’t just block Gash: he literally stomped him so Thomas could make his way into the end zone unscathed.

Staba described Ballard as the biggest human he had ever laid eyes on during the post-game locker room interview.

The Niagara Falls Reporter writer approached Ballard just as he stepped out of the shower with a beach towel wrapped around his waist.

Staba wanted to get Ballard’s thoughts on his bone-crushing block on Gash. When he asked Ballard if he got a minute, he got an awkward response from the Bills right tackle.

“His response – the sort of grunt you hear from a rhinoceros right before it drives its horn right through your sternum,” Staba wrote in his 1990 Niagara Falls Reporter article.

After what seemed like an eternity, Ballard finally replied in the negative.

Staba tried to elicit more quote-worthy responses from the stoic Ballard over the years, to no avail.

Ballard’s best years in the National Football League were from 1991 to 1993.

Ballard was also one of the stonewalls that protected quarterback Jim Kelly and opened up holes for running back Thurman Thomas during the Bills’ historic four-year Super Bowl run from 1990 to 1993.

His new contract with Seattle also included a $2.4 million signing bonus and a first-year base salary of $1.925 million, per The Buffalo News’ Vic Carucci.

Butler told Carucci the restructuring process was like a chess match that went back and forth.

“I enjoyed Buffalo when I was there,” Ballard told Carucci. “Now it’s time to move on to bigger and better things.”

Ballard signed with the Seahawks because he loved the team’s youthful exuberance.

“The fact they’re a young team with the fire in their eyes contributed a lot to making the decision I made and as quickly as I made it,” Ballard told The Buffalo News in 1994.

Ballard compared the 1994 Seattle Seahawks to the 1988 version of the Buffalo Bills – a young and hungry team that’s a few pieces away from becoming Super Bowl contenders, per Carucci.

Ballard eventually started seventy-four games for the Seahawks during his five-year stay in the Emerald City.

Howard Ballard retired from the National Football League in September 1999.

Ballard decided to hang up his cleats due to recurring knee issues that had bothered him since the 1996 NFL campaign, per the Kitsap Sun’s Scott M. Johnson.

Despite Ballard’s nagging knee concerns, he never missed a regular-season game in his eleven-year NFL career.

Unfortunately, Ballard’s left knee caused plenty of discomfort in the summer of 1999. It prompted him to announce his retirement from professional football.

Prior to Ballard’s retirement, he suited up for the first eight plays of the Seahawks’ preseason. He sat out the team’s final three preseason games.

According to Johnson, Ballard’s immediate plans after retirement were uncertain.

Ballard and Seahawks head coach Mike Holmgren had discussed the possibility of him becoming a member of the coaching staff.

However, Ballard would eventually embark on a coaching career at the high school and college levels after he left the National Football League.

Following Howard Ballard’s retirement from the National Football League, he served as a sheriff’s deputy in Clay County, AL.

Ballard returned to the University of Alabama A&M during that time to finish his bachelor’s degree.

He embarked on a football coaching career with the Pike County Bulldogs and Lane College Dragons several years later.

Ballard is currently the offensive line coach of the Dragons who are based in Jackson, TN.

Ballard is a member of the Seattle Seahawks 35th Anniversary Team.

The Life And Career Of Scott Norwood (Story)

The Life And Career Of Kevin Everett (Story)

The Life And Career Of Bruce Smith (Story)

The Life And Career Of EJ Manuel (Story)

The Life And Career Of Jim Kelly (Story)

The Life And Career Of Steve Tasker (Complete Story)

The Life And Career Of Jack Kemp (Complete Story)

The Life And Career Of Doug Flutie (Complete Story)

What Happened To Lee Evans? (Story)

The Life And Career Of Ron McDole (Complete Story)

The Life And Career Of Kent Hull (Complete Story)

The Life And Career Of Cookie Gilchrist (Complete Story)

The Life And Sad Death Of Bob Kalsu (Complete Story)

The Life And Career Of Joe Cribbs (Complete Story)

The Life And Career Of Andre Reed (Complete Story)

The Life And Career Of Bryce Paup (Complete Story)

The Life And Career Of Willis McGahee (Complete Story)