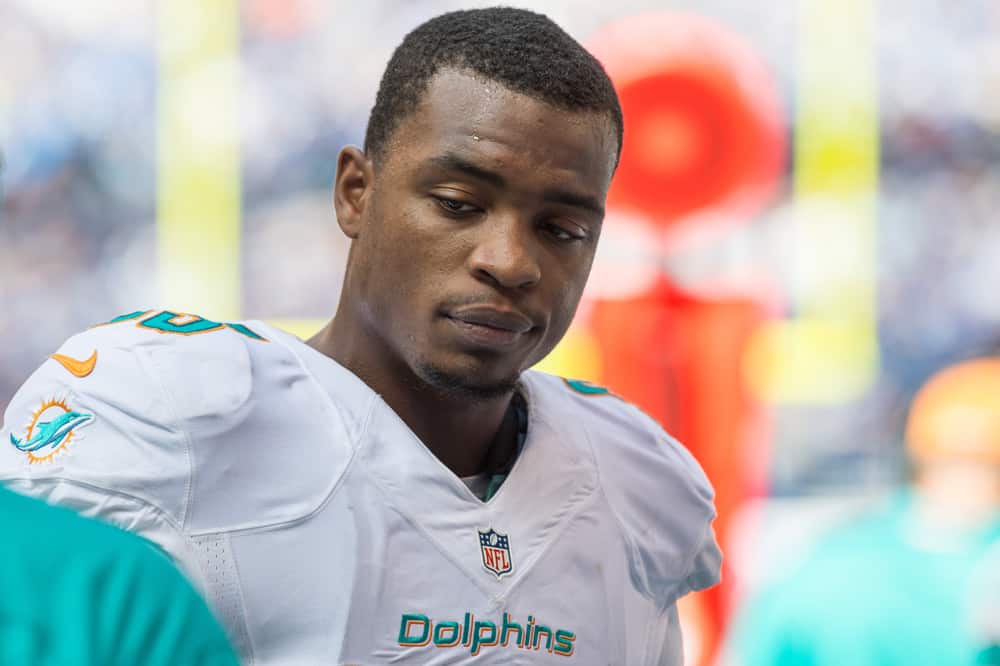 Heading into the 2013 NFL Draft, almost every team at the top of the board was focused on one thing: linemen.

The most highly rated prospects were either tackles or edge rushers.

It made sense as the quarterback position continued to grow more important with every year and rule change.

Teams either needed to protect their quarterback or hit the other team’s QB.

After the Kansas City Chiefs and Jacksonville Jaguars drafted tackles, the Miami Dolphins traded up to the third spot.

The flip with the Oakland Raiders sent No. 12 and No. 42 overall to give the Dolphins the chance to take a highly touted defensive lineman third overall.

Dion Jordan, a tight end turned edge rusher from the University of Oregon, was the choice.

A deadly mix of size and athleticism helped the 6’6”, 248 lbs, Jordan climb big boards around the league.

The Dolphins had struggled to get out of the NFL’s basement for years but hoped their stretch of high draft picks would turn into team success.

One issue with those high drafts picks is that they need to pan out.

Unfortunately for the Dolphins, Jordan would quickly garner the label of a draft bust.

With the No. 3 overall pick in the 2013 NFL Draft, the Dolphins select DE Dion Jordan of Oregon pic.twitter.com/sqDShKAvj4

Almost Gone in a Flash

At Chandler High School in Chandler, Arizona, Dion Rory Jordan was most known for his big body and soft hands as a tight end.

He posted more than 800 yards and 13 touchdowns in his junior season.

In his senior year, he was on pace for even more impressive numbers until a serious accident nearly took his life.

The night after posting six catches for 124 yards and a touchdown, Jordan was taken to the emergency room.

A friend of Jordan’s was siphoning gas with a vacuum cleaner, and when Jordan walked over to turn it off, a spark lit Jordan on fire.

The incident nearly ended his life and took away his football career.

After rehabilitating from the severe burns, Jordan focused back on football and the recruiting offers kept coming.

He flew out to Eugene, Oregon, fell in love with the campus, and committed to play wide receiver for the Ducks.

Flipping Sides of the Ball

After redshirting for his freshman year at the University of Oregon, Jordan was ready to debut on an electric Ducks’ offense.

He saw some special teams action as a freshman but never took the field on offense.

Jordan shifted to tight end after a growth spurt.

In his sophomore season, Ducks’ coach Chip Kelly realized that Jordan belonged on the defensive side of the ball.

“He just kept getting bigger and bigger,” Kelly said to the Arizona Republic. “So we moved him into tight end, then we moved him from tight end to defensive end, and he has really flourished on the defensive side of the ball this year.”

Momentum started building for Jordan as he finished with 33 tackles and two sacks in 2010.

On this day, the Tigers faced Oregon in the 2011 BCS National Championship Game.

Tied 19-19 with a little over two minutes remaining, Auburn drove 73 yards to the Oregon one-yard line and won the game with a @wesbyrum field goal as time expired. pic.twitter.com/WZinU5ErTl

Jordan improved across the board in his junior season and tallied 42 tackles, 13 tackles for loss, and 7.5 sacks.

Hype for the draft started to build as Jordan prepared to make one more run toward a title in his senior season.

He posted another consistent season with 44 tackles, 10 tackles for loss, and five sacks.

When mock drafts started coming out, Jordan was ranked in the top five regularly.

Coming off of a 7-9 campaign in Joe Philbin’s first season as coach, the Dolphins looked to make a splash in the NFL Draft.

The trade up to acquire Jordan third overall appeared to add depth to a defensive line led by Cameron Wake.

Things got off to a rocky start in Miami as Jordan reaggravated a shoulder injury during training camp.

With barely any preseason reps, Jordan returned for the season opener and saw limited action.

In only 17 snaps on defense in the season opener against Cleveland, Jordan recorded his first career sack.

Consistent playing time was hard to come by for Jordan as a rookie.

His season-high for defensive snaps came in Week 11 against Carolina when he recorded his second sack of the season.

The No. 3 overall pick finished with 26 tackles and two sacks in a disappointing rookie campaign.

Trouble Staying on the Field

In the lead up to his sophomore season in the NFL, Jordan was suspended for violating the NFL’s performance-enhancing drug policy.

After serving two weeks of the initial suspension, Jordan violated the league’s substance-abuse policy and missed the next four games.

When Jordan returned to the Dolphins, his reps continued to be inconsistent.

Much like in his rookie season, Jordan never topped 30 defensive snaps and finished the season with 20 tackles and one sack.

That dreaded “B”-word started floating around in NFL circles and the Miami Dolphins’ fanbase.

Jordan needed a major leap forward in his third season so he wouldn’t go down in history as a draft bust.

Even though he didn’t test positive, Jordan accepted his suspension and saw the potential of his career ending.

“We were disappointed to learn about Dion Jordan’s most recent suspension for violating the NFL’s Policy and Program for Substances of Abuse,” the Dolphins said in a statement. “A player’s health and well-being are of the utmost importance to us. We have made every effort to support Dion, both on and off the field and we will continue to do so to the extent allowable under NFL guidelines.”

After being suspended for the 2015 season, Jordan was reinstated to the league in July 2016.

Even with protocols in place for Jordan to return to the field, he didn’t play a single down for the Dolphins in 2016.

In March 2017, the Dolphins released Jordan after he failed a physical.

His career with Miami ended with 26 games played, 46 tackles and three sacks.

After three years and three strikes in the substance abuse policy, it seemed Jordan’s career might be over.

A Chance in the Pacific Northwest

Pete Carroll and the Seattle Seahawks prided themselves on second chances and elite defense.

About a month after the Dolphins released Jordan, the Seahawks gave him a chance.

It took eight weeks before Jordan saw the field in Seattle after starting the season on the injured reserve list, rehabbing a knee injury.

Jordan saw the field about as much as he had in Miami but managed to record a sack in four of his five games played in 2017.

With a renewed sense of purpose and the pressure of being a high pick off his back, Jordan was ready for a strong 2018 season.

The Seahawks wanted him back and placed a restricted free agency tender on him.

After undergoing knee surgery in the offseason, Jordan slowly increased his reps and became a steady rotational piece on Seattle’s defensive line.

As Jordan looked to prove his worth in the NFL, his past mistakes caught up to him again.

Another strike landed on Jordan’s record in the 2019 offseason.

He was suspended 10 games for a failed drug test because of Adderall.

Jordan claimed he was sober and the Adderall test wasn’t a sign of relapse into his former drug usage.

On November 9, 2019, Jordan signed with the Oakland Raiders and served out the remainder of his 10-game suspension.

In his Week 11 return, Jordan once again recorded a sack in his first game with a team.

He finished the 2019 season with two sacks and 5.5 tackles, playing in almost half of the Raiders’ defensive snaps by the end of the season.

As the Raiders prepared to move to Las Vegas, Jordan wasn’t offered a contract to follow the team to Sin City.

Jordan decided to stay in the Bay Area and signed a contract with the San Francisco 49ers on August 7, 2020.

He was cut and assigned to the practice squad a few weeks after his signing and waiting to see if injuries or COVID-19 protocols would give him a chance to make the 49ers active roster.

Prior to the 49ers Week 3 contest against the New York Giants, Jordan was called up to the active roster.

Once again, Jordan recorded a sack in his first game with a new team.

San Francisco kept him on the active roster for the remainder of the season and he finished with 17 tackles, three sacks, and blocked a PAT against the LA Rams.

Throw your hands in the AIR JORDAN!

The once highly-touted draft pick has bounced from city to city in pursuit of a home to establish his NFL career.

Jordan, who will be 31 when the 2021 season starts, doesn’t have a guarantee where or if he’ll play football.

After journeying across the league and being labeled a bust for being cut by Miami, Jordan keeps finding a way.

If he gets another chance, you can expect he’ll probably get a sack in his first game with whoever signs him.

The Life And Career Of Larry Little (Story)

The Life And Career Of Mark Clayton (Story)

The Life And Career Of Dan Marino (Story)

What Happened To Garo Yepremian? (Story)

What Happened To Reggie Roby? (Story)

The Life And Career Of Larry Csonka (Complete Story)

The Life And Career Of Don Shula (Complete Story)

The Life And Career Of David Woodley (Complete Story)