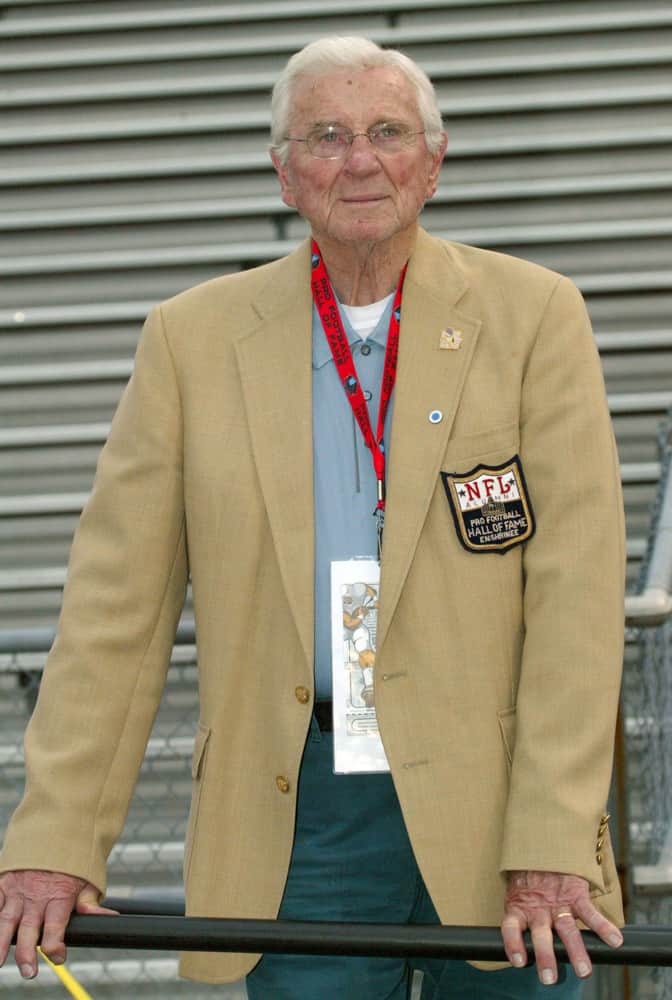 It takes a special type of person to play in the National Football League.

The commitment is unique because a player is sacrificing his blood, sweat, tears and body to play the game.

Every player who has ever put on an NFL uniform knows this.

However, some have exuded their dedication to the sport by their very presence on the field.

Chuck Bednarik was such a player.

As hard as it is to believe, Bednarik played 14 years and only missed three games.

Furthermore, he accomplished this feat while playing on both sides of the ball.

Chuck Bednarik has entered the chat and would like a word. pic.twitter.com/ttG83z206U

”Concrete Charlie” was one of the last of his kind and has been immortalized forever as a member of the Pro Football Hall of Fame.

This is his story.

Charles Phillip Bednarik was born on May 1, 1925 in Bethlehem, Pennsylvania.

His parents had emigrated from Slovakia before he was born.

Growing up, Bednarik attended the SS. Cyril & Methodius School, a Slovak-based school where he learned the language.

Initially, Bednarik’s mother did not want her son to play such a violent sport.

However, Bednarik’s father stepped in and gave him permission to play.

At Liberty High School in Bethlehem, Bednarik played well and with distinction.

During his junior year, the tough-nosed Bednarik helped lead Liberty to an undefeated season.

Ordinarily, someone with Bednarik’s talent would have jumped right to college ball after graduation.

However, WWII was in full swing and Bednarik enlisted.

Serving in the Air Force, he was a waist gunner in a B-24 bomber.

Since the military is being recognized at the #SBLIII we wanted to share the story of Chuck Bednarik. “Concrete Charlie” left for training before he could pick up his high school diploma…he joined the US Army Air Corps. Read ⤵️ pic.twitter.com/M5p7wiTecx

Throughout the remainder of the war, Bednarik took part in 30 combat missions, specifically over Germany.

That led to Bednarik being decorated with an Air Medal for heroism, four Oak Leaf Clusters, the European-African-Middle Eastern Campaign medal and four Battle Stars.

“How we survived I don’t know,” Bednarik said. “From then on, great things happened for me.”

Shortly after returning from the war, Bednarik enrolled in the University of Pennsylvania in Philadelphia.

He was already talented in the sport from his high school days.

However, after serving overseas, Bednarik acquired a survival mindset and brutal exterior.

For the next four years, he lettered with the Quakers football team.

The Penn Football program joins the entire football community in mourning the passing of Chuck Bednarik this morning. pic.twitter.com/D7L8aoLCAx

Playing center and linebacker, Bednarik was named an All-American after both his junior and senior years.

He also won the Maxwell Award (the first time ever for an offensive lineman) as the best all-around athlete in college football in 1948.

Astonishingly, Bednarik finished third in the Heisman voting that year as well.

It would be the highest finish for an interior lineman in Heisman history.

Bednarik would be voted into the College Football Hall of Fame in 1969.

The benefit of playing in Philadelphia for his college career meant that the hometown Eagles saw a lot of Bednarik.

The franchise was coming off back-to-back NFL Championship game appearances (with a victory in 1948) and still had the first overall pick of the 1949 NFL Draft.

With that selection, they drafted Bednarik.

In a testament to his athletic ability, Bednarik turned down an opportunity to be drafted as a catcher by the Philadelphia Athletics baseball team.

As one of the NFL’s last “Sixty Minute Men,” Bednarik continued to play both sides of the ball as a center and linebacker for the Eagles.

He started seven games as a rookie in 1949 while Philly went 11-1 and defeated the LA Rams for their second straight title.

Before the 1950 season, the NFL voted to allow free substitution.

That meant that players no longer had to play iron man football.

However, that wasn’t Bednarik’s style.

In 1950, Bednarik started every game of the season (on both sides of the ball) and pulled down an interception on defense.

He also recorded a fumble recovery (the NFL did not keep track of tackles at the time).

The 1950 season marked the first of eight consecutive years where Bednarik would be named a First-team All-Pro.

It was also the first of five straight Pro Bowl appearances for Bednarik.

For the next three years, Bednarik continued to play both ways.

Meanwhile, the Eagles had slipped back into mediocrity, never winning more than seven games each year.

In 1953, Bednarik intercepted a career high six passes for 116 return yards and an interception.

During his fourth Pro Bowl after the season, Bednarik’s performance led to him being named the player of the game.

As he continued to play offense and defense, and start every game each season, Bednarik decided to rethink his iron man commitment.

By 1956, he settled for playing only on defense and remained one of the Eagles’ starting linebackers.

While fully engaged on the gridiron during the season, Bednarik was also staying busy away from the game.

Unlike today, NFL stars in Bednarik’s time were not paid well.

During the offseasons, he worked as a concrete salesman for the Warner Company.

Since he was an accomplished player, even his second job was public knowledge.

During one particular season, Hugh Brown of the Philadelphia newspaper The Evening Bulletin wrote a story about Bednarik.

In the story, Brown described Bednarik “as hard as the concrete he sells.”

For many years since, it has been pro football lore that Bednarik acquired the moniker for how hard he hit.

Although that wasn’t the case, the nickname stuck and opponents were fearful of straying into Bednarik’s path.

As he was completing his tenth season in 1958, Bednarik decided that he’d had enough.

Philly was continuing to get worse and won only two games that year under new coach Buck Shaw.

The wear and tear on Bednarik’s body was catching up to him and he announced his retirement at the conclusion of the season.

The itch to continue playing was too much and he returned to the Eagles.

This week in 1959, "Chuck Bednarik Day".#Eagles legend Chuck Bednarik enters Philadelphia's Franklin Field as he is honored upon his retirement.

"Concrete Charlie" would unretire in 1960, helping lead the Eagles to the NFL Championship. pic.twitter.com/vCZDcZBlxZ

However, Bednarik wanted to concentrate on center duties only.

That notion was also short lived when Shaw convinced Bednarik to replace an ineffective linebacker.

“Buck told me that the other guys just weren’t doing a good enough job [at linebacker] and that he needed me to play both ways,” Bednarik said. “So I did it.”

Philadelphia began to turn things around when Bednarik returned.

It was evident by the end of the year that the team was about to bust loose.

The Gifford Hit and a Championship in 1960

Bednarik was embarking on his 12th NFL season in 1960.

He should have been slowing down and enjoying the game in his twilight years.

Instead, he was as cantankerous as ever.

Bednarik had already been involved in serious melees in his career.

Both men had squared off years earlier when Noll punched Bednarik in the face during a punt.

Bednarik put a haymaker on Noll long after the whistle blew and would be fined by Commissioner Bert Bell over the incident.

Bell also ordered Bednarik to apologize.  According to Bednarik, when he finally offered his apology, Noll dismissed the gesture with a simple word.  “Bull****.”

During the 1960 season, the Eagles faced the New York Giants.

In one of the most vicious hits in league history, Bednarik leveled New York’s Frank Gifford.

The impact of the play gave Gifford a severe concussion and he did not play football again until 1962.

Bednarik later claimed that he did not know at the time how serious Gifford’s injury was.

He also claimed that the iconic photo of him celebrating over Gifford was simply his response to causing a fumble.

Gifford never held any animosity toward Bednarik about the infamous hit.

“I didn’t bear him any resentment and never have,” Gifford said in his 1994 memoir, The Whole Ten Yards. “His tackle had been perfectly legal.”

Only weeks later, the 10-2 Eagles found themselves in the NFL Championship game against coach Vince Lomabardi and the Packers.

The Eagles were leading Green Bay 17-13 late in the 4th quarter and Packers quarterback Bart Starr methodically drove the Pack down the field.

With time running out, Starr found running back Jim Taylor on a short pass.

“He got through a couple of our defenders,” Bednarik said after the game, “but he had to go through me. That wasn’t going to happen.”

Bednarik grabbed Taylor and wrestled him to the ground.

He then proceeded to lay on top of Taylor, preventing him from returning to the line of scrimmage to run another play.

The game clock soon displayed all zeros and Bednarik gestured to Taylor.

“You can get up now, Jim, this game is over,” Bednarik told an enraged Taylor.

The Eagles had their third NFL title and Lomardi was defeated for the first (and only) time in a championship game.

This Day In 1960: Eagles win title. Chuck Bednarik celebrates with a cigar and a cigarette (📷 by Herb Scharfman/SI) pic.twitter.com/AuYefINWg0

In a response to Bednarik’s ‘tactic,’ NFL rules changed after the season to penalize defensive players for preventing an offensive player from getting up from a tackle.

The Eagles nearly returned to the title game the following season after finishing 10-4.

However, their second place finish in the NFL Eastern Division prevented them from advancing.

In 1962, the team bottomed out with only three victories.

Father Time finally caught up to him, however, and he retired from the game for good following the ‘62 season.

He tallied 20 total interceptions including one for a score and added 21 fumble recoveries.

He would later be selected as a member of the NFL’s 1950s All-Decade Team as well as the league’s 50th, 75th and 100th Anniversary All-Time Teams.

Bednarik is in the Eagles Hall of Fame and his jersey number 60 has been retired by the franchise.

Bednarik stayed busy in retirement and spent two decades as the chairman of the Pennsylvania State Athletic Commission.

In 1967, he was voted into the Pro Football Hall of Fame.

Since 1995, the Chuck Bednarik Award has been given annually to the best defensive player in college football.

Bednarik was frequently critical of the modern game, including future two-way players such as Deion Sanders.

“Deion couldn’t tackle my wife Emma,” Bednarik said. “He’s not what I’d call an iron man. The iron man is up front where the action is, where the hitting is constant.”

In Bednarik’s less than humble position, the modern game had nothing on the violence of his time.

“There was contact on every play,” he said. “You got the stuffing beat out of you, not like this pantywaist stuff today.”

When he wasn’t griping about football, Bednarik played the accordion and golf, attended Lehigh University football games and doted on Emma (his wife of over 50 years) along with their children and grandchildren.

Bednarik’s playing style eventually caught up to him.

By his later years, “Concrete Charlie” was suffering from dementia and Alzheimer’s, conditions that were attributable to his NFL career.

While still alive, Bednarik perfectly summed up his life on and off the gridiron. 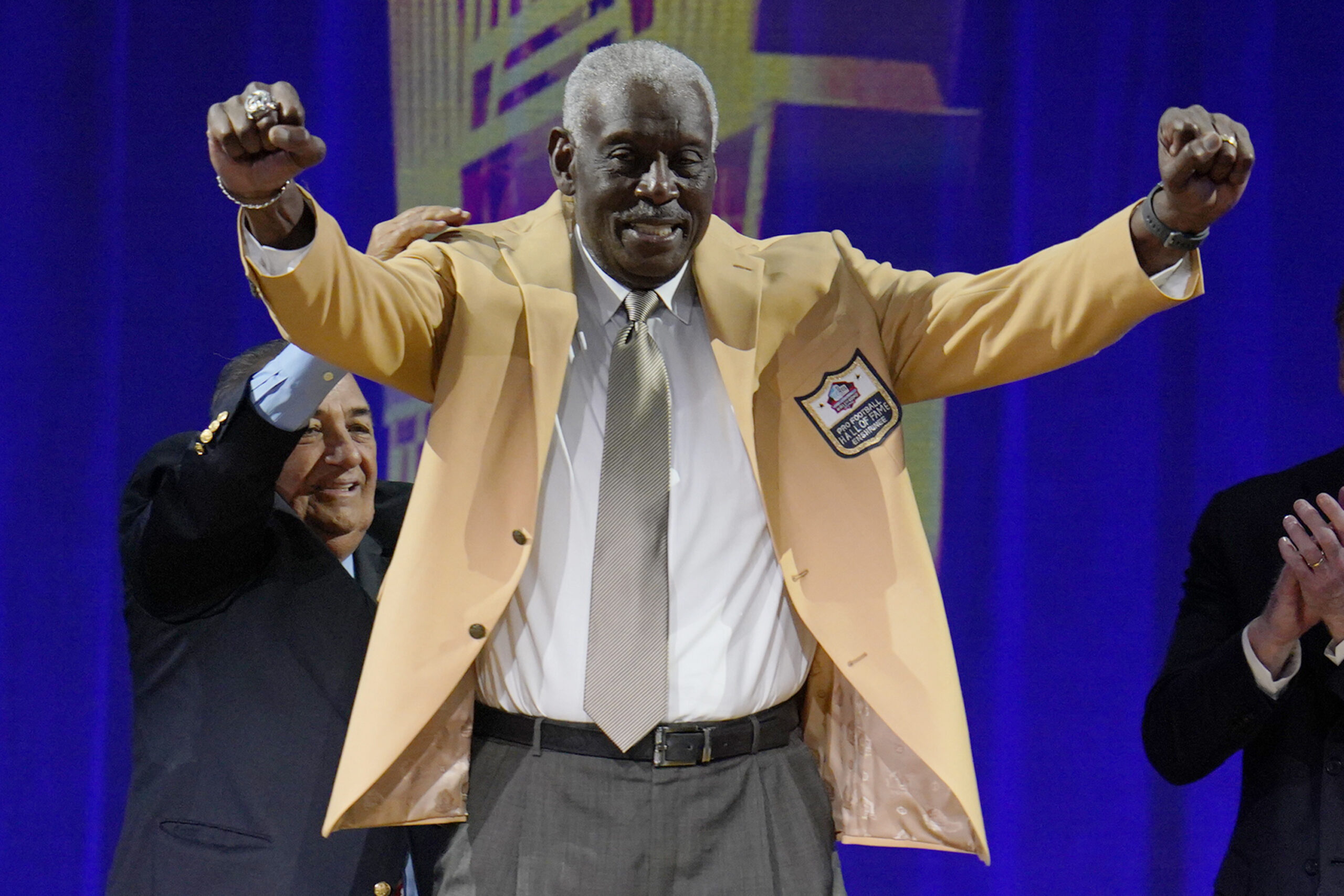 The Life And Career Of Harold Carmichael (Complete Story) 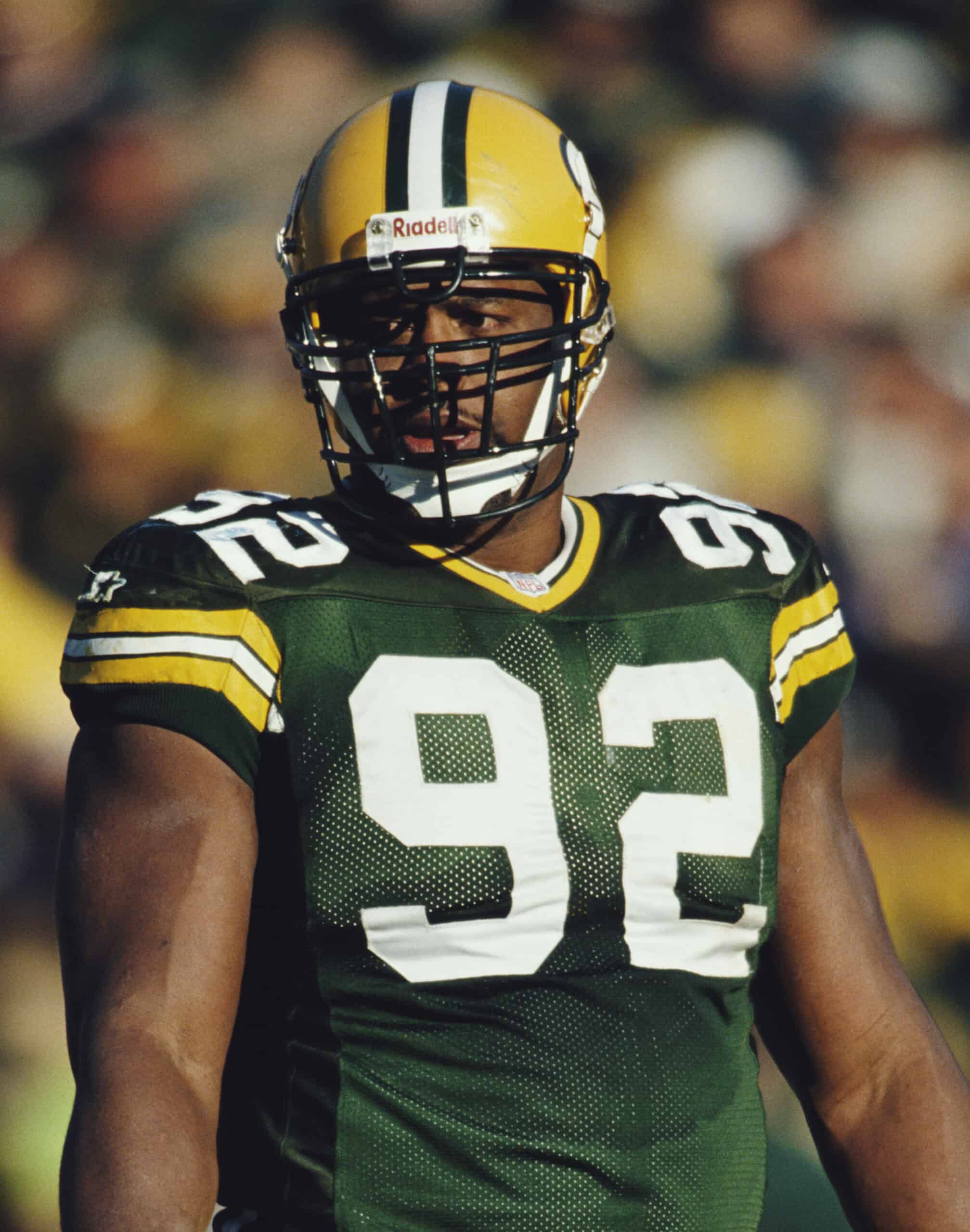 The Life And Career Of Reggie White (Complete Story) 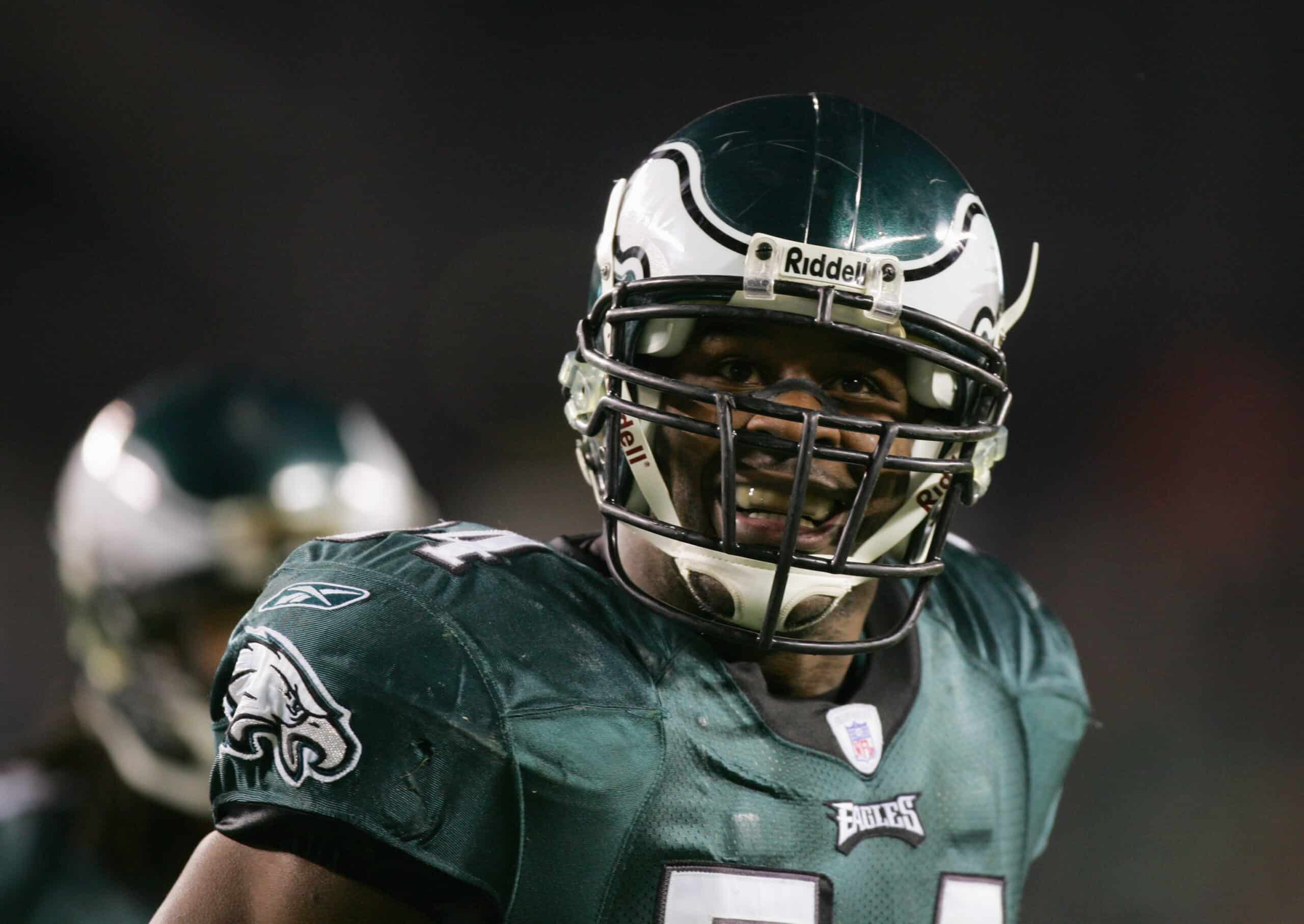 What Happened To Jeremiah Trotter? (Story)