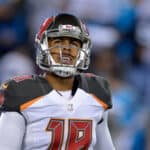 Roberto Aguayo, the most accurate kicker in NCAA history, could've rewritten the record books in the NFL. He could've been mentioned in the same breath as Justin Tucker, Lou Groza, Morten Andersen, and George Blanda once he hung up his cleats. Alas, fate had other ideas. While Aguayo took the college game by storm, his reputation took a massive hit in the … END_OF_DOCUMENT_TOKEN_TO_BE_REPLACED