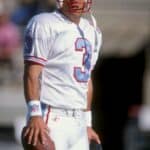 Veteran kicker Al Del Greco was the epitome of good fortune in the National Football League. After the Miami Dolphins released him prior to the 1984 NFL season, the Green Bay Packers signed him a month after. Some three years later, the Packers released him. He eventually suited up for the then-St. Louis Cardinals (now known as the Arizona Cardinals) for … END_OF_DOCUMENT_TOKEN_TO_BE_REPLACED