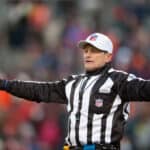 Few - if any - officials in pro football history had a physique as imposing as Ed Hochuli's. Hochuli developed his muscular frame when he played linebacker for the UTEP Miners during his college days from 1969 to 1972. When he bade his football playing days goodbye to focus on his career as a lawyer and NFL official, he maintained his incredible musculature … END_OF_DOCUMENT_TOKEN_TO_BE_REPLACED