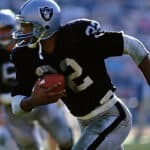 If you were to imagine the perfect course of an NFL career, it would be somewhat similar to the NFL career of Marcus Allen. You would start by being named Rookie of the Year and then continue by winning a Super Bowl, being voted Most Valuable Player in the Super Bowl, and being awarded Most Valuable Player for an entire NFL season. If you would face adversity on a team, … END_OF_DOCUMENT_TOKEN_TO_BE_REPLACED