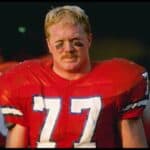 Legendary Denver Broncos linebacker Karl Mecklenburg was one of the best feel-good stories of the NFL in the early 1980s. Mecklenburg, who was in the same 1983 draft class as quarterback John Elway, arrived in Denver with little fanfare. Mecklenburg was a 12th-round draft selection who Broncos fans knew nothing about, but the man known as "The Albino Rhino" … END_OF_DOCUMENT_TOKEN_TO_BE_REPLACED

The Life And Career Of Karl Mecklenburg (Story)