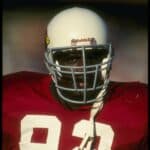 In the 1980s, the Washington Redskins were one of the best and most feared teams in the National Football League. They had a bunch of colorful characters, as well as a hard-hitting style of play. Washington featured a group of rough-and-tumble offensive linemen called "The Hogs," and they also featured a star defensive end named Dexter Manley. Manley became one … END_OF_DOCUMENT_TOKEN_TO_BE_REPLACED