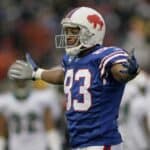 Blazing speed and sure hands. These were the words that aptly described Buffalo Bills wide receiver Lee Evans. Evans recorded several 1,000-yard receiving seasons with the Bills during his seven-year tenure in Western New York. He even recorded 205 receiving yards on just six receptions in the first quarter of a game against the Houston Texans in … END_OF_DOCUMENT_TOKEN_TO_BE_REPLACED