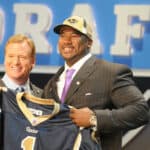 If there was a metaphor to the story of Samson in the National Football League, it would have to be Jason Smith. Samson was the biblical character who lost his strength after Delilah cut his hair. In similar fashion, Smith, a hulking 6,5", 310-lb. offensive tackle, lost his swagger on the field after he sustained concussions and various injuries. He was a … END_OF_DOCUMENT_TOKEN_TO_BE_REPLACED 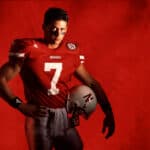 As a college quarterback, Eric Crouch seemed unstoppable. He broke NCAA records on a regular basis, had the Nebraska Cornhuskers in contention for a national championship almost every year he started, and even won the Heisman trophy his final season in 2001. With all of this success at the college level, many assumed that Crouch would go on to be a star at the … END_OF_DOCUMENT_TOKEN_TO_BE_REPLACED 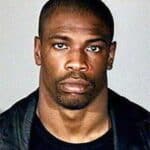 Agility, mobility, and bruising hits are the key traits of a running back. Lawrence Phillips's entire upbringing reflects that life. He moved from one foster home to the next for much of his youth, enduring child abuse. Movement was a constant as he changed schools regularly. An unstable upbringing defined Phillips's entire life. His NFL career mirrored … END_OF_DOCUMENT_TOKEN_TO_BE_REPLACED