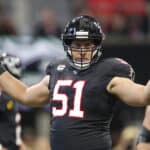 Alex Mack wasn't just a "big nerd"—he was one of the best centers in the National Football League from 2009 to 2021. The 6'4", 311-lb. Mack was a stone wall on the offensive lines of the Cleveland Browns and Atlanta Falcons during his 13-year pro football career. Mack rose from obscurity in high school to become a seven-time Pro Bowler in the NFL. Part of … END_OF_DOCUMENT_TOKEN_TO_BE_REPLACED 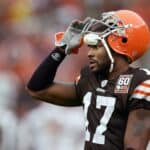 Braylon Edwards was one of the most athletic wide receivers to ever play in the NFL. While this college superstar didn't make too many waves in the NFL, Edwards excelled at his position and made defenders look lost when guarding him. From a young kid in Detroit to a superstar at the University of Michigan, Braylon achieved his dreams through hard work and … END_OF_DOCUMENT_TOKEN_TO_BE_REPLACED 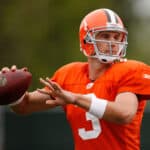 Derek Anderson had one of the most colorful careers of any NFL quarterback. First, the Baltimore Ravens shunned him. He then had 3,787 passing yards and became a Pro Bowler in his first season as the Cleveland Browns' starting signal caller in 2007. The Dawg Pound suddenly criticized Anderson after a mediocre showing a season later. He wasn't much better … END_OF_DOCUMENT_TOKEN_TO_BE_REPLACED 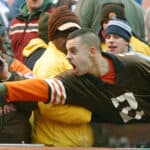 After a three-year hiatus, the Cleveland Browns returned to the NFL for the 1999 season. By 2001, the team was slowly showing signs of improvement. Two wins in ‘99 begat three in 2000. As the Browns entered their bye after Week 6 in 2001, they were sitting pretty at 4-2. However, after the bye, the team promptly dropped four out of their next … END_OF_DOCUMENT_TOKEN_TO_BE_REPLACED