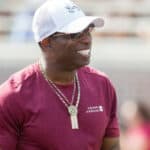 The 1989 NFL Draft is considered one of the best drafts in league history. No less than five of the first 20 picks were eventually voted into the Pro Football Hall of Fame. In fact, four of those Hall of Fame players were selected within the first five picks. Michigan State tackle Tony Mandarich (taken number two overall) became notorious in his own right as … END_OF_DOCUMENT_TOKEN_TO_BE_REPLACED